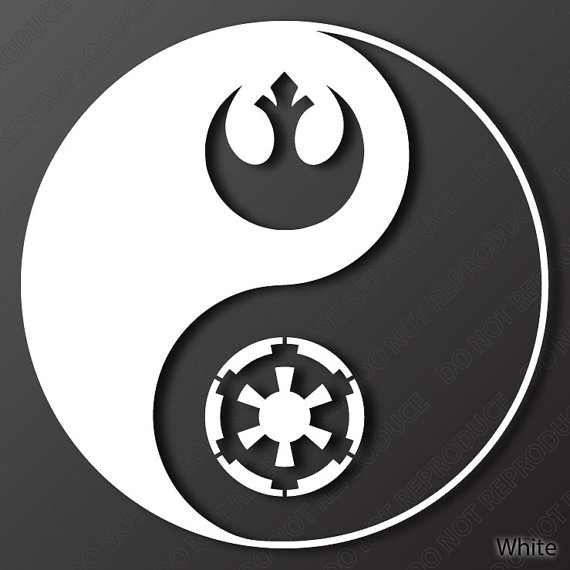 I’ve often observed that Star Wars’ symbolism seems more in line with Taoism’s ideas about balance between opposing forces, rather than depicting a Manichaean or Zoroastrian dualism of good vs. evil. And so I was pleased to find that the Taoist Yin Yang symbol had been given a Star Wars twist to it, as illustrated above in one of many examples I found.

October 29, 2014 Did Jesus Die in Outer Space?
Recent Comments
1 Comment | Leave a Comment
"hey mr dr lost fan. one of your video is not available anymore, either remove ..."
irshad Is Google Smarter Than Your Pet?
"see? some church padres forgot this like the one who said to donate to his ..."
irshad A Reminder: Jesus Didn’t Say “Bully ..."
"so checked eutychus blog and obviously this patheos.com but all i got is that original ..."
irshad Fork Criticism: Understanding Biblical Criticism Through ..."
"considering james f. mcgrath wrote some fiction stories how is he gonna judge all the ..."
irshad The Root of All Evil?
Browse Our Archives
get the latest updates from
Religion Prof: The Blog of James F. McGrath
and the Patheos
Progressive Christian
Channel
Books by This Author Books by James F. McGrath