I learned previously that Ken Ham is a Doctor Who fan. But a photo in a recent article on RawStory made it clear that he is a die-hard Whovian.

I find it distressing enough that he is associated with my faith tradition as a Christian. But that he is a Whovian as well seemed too much to bear.

But then I realized that this is a good thing. It is a reminder that Ken Ham, whatever the harm he does to Christianity or to science education, is nevertheless a human being like me. It is so easy to see the evils and shortcomings and flaws of others, but none of us is entirely without them.

How do you react when you learn that someone whose statements you find disturbing is a fan of something that you also like – a TV show, a movie, a band, or anything else? And how might the Doctor deal with someone like Ken Ham? I can think of a number of episodes which suggest that, given his broad universal perspective, he might merely smile at Ham’s wrongness and get on with fighting the real monsters… 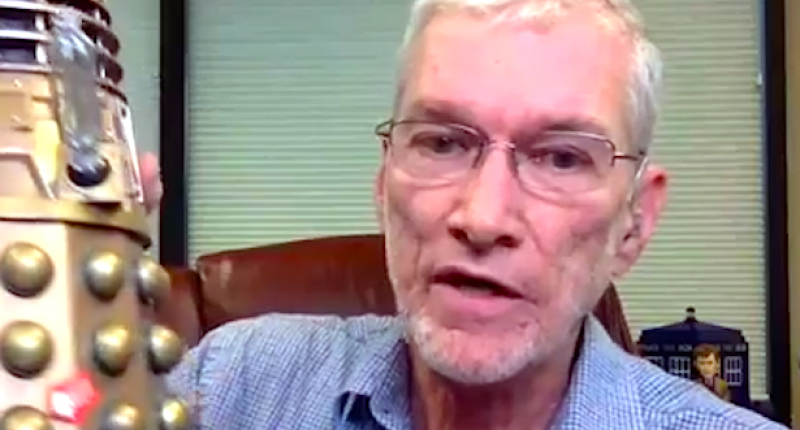 December 1, 2014
Explaining the Fossil Evidence from a YEC Perspective
Next Post

America’s New Religion and the Scandal...
What God Wants for Your Life
4

Donald Trump, Roger Stone, and the Difference Between...
With Donald Trump’s commutation of Roger Stone’s prison sentence last week, we...

A Prophet, Two Brothers, Jesus and a Drone...
Most of the religious traditions I have been exposed to promote a...

Peter: An Exuberant Goober
We finally wrapped up our study of the Gospel of John in...

Biblical Justice is Social Justice
Running through the theological framework of fundamentalism and evangelicalism, perhaps even the...
view all Progressive Christian blogs
What Are Your Thoughts?leave a comment
Copyright 2008-2020, Patheos. All rights reserved.