The episode begins with Jin being recaptured along with Michael and Sawyer by “others.” They are thrown into a pit. Eventually another person, a woman, is thrown down there. It turns out to be Ana-Lucia, from the tail section. We eventually learn that she is working with the people who captured them, and then that they are all survivors from the tail section.

In a flashback, John Locke is in a meeting for people coping with anger. Locke gets angry at people complaining about minor things and tells his story. He then meets Helen, and they start a relationship. He finally gets to talk to his father, and asks him “why?” He is told, “There is no why. You think you’re the first person who ever got conned? You needed a father figure, and I needed a kidney. Don’t come back, you’re not wanted.” Helen talks about having wasted 20 years being angry, and makes Locke promise to stop going to wait outside his father’s house. He agrees, but eventually goes back, and Helen confronts him, telling him he has to choose between his father and her. She talks of a “leap of faith.”

Back on the island, when Kate knocks Desmond over and a gun fires and hits a computer, Desmond says “we’re all gonna die.” Desmond tells the story of meeting Kelvin, and his explaining his pushing of the button as “Just saving the world.” Jack says it makes no sense, so Desmond tells them to watch the orientation film. 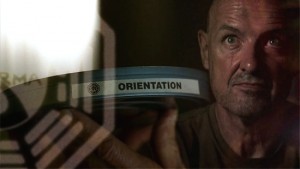 Locke responds to Jack’s talk of impossibility by saying that Jack and Desmond knowing each other would be impossible.

Kate goes to get Sayid to help fix the computer.

The orientation video mentions the DeGroots and Alvar Hanso and the Dharma Initiative, the unique elecromagnetic properties of that part of the island, and it is clear that pieces are missing. Locke says “We’re gonna need to watch that again.”

Jack suggests that having him push the button might just be a mind game, an experiment to see if he’d do it, with the quarantine sign just to keep him scared and down there. He says he does every single day. When trying to fix it doesn’t work, after making the sign of the cross, Desmond grabs some things and leaves. Locke is left alone there and shouts, “What am I supposed to do?”

Kate returns with Sayid and Hurley.

Jack catches up with and confronts Desmond, talking about him taking what was in that movie on faith. Desmond asks Jack about the girl Jack told him about, whose recovery from her spinal injuries would be a miracle. Jack says he married her, and we learn that he’s not married to her any more. Desmond leaves, saying once again, “See you in another life, yeah?”

They get the computer working again, and type in the numbers in time. And we have the wonderful bit of dialogue between Locke and Jack.

Locke: “Why do you find it so hard to believe?”

Locke says he can’t do it alone – it’s a leap of faith. Jack hits “Execute” and Locke takes the first shift.

The exploration of a leap of faith that involves a matter that may be science, and on no level appears to be religion, makes for a fascinating scenario, and the premise to a wonderful season and a wonderful element of the series as a whole.

December 19, 2014 Pathetic Symphony
Recent Comments
0 | Leave a Comment
Browse Our Archives
get the latest from
Religion Prof: The Blog of James F. McGrath
Sign up for our newsletter
POPULAR AT PATHEOS Progressive Christian
1