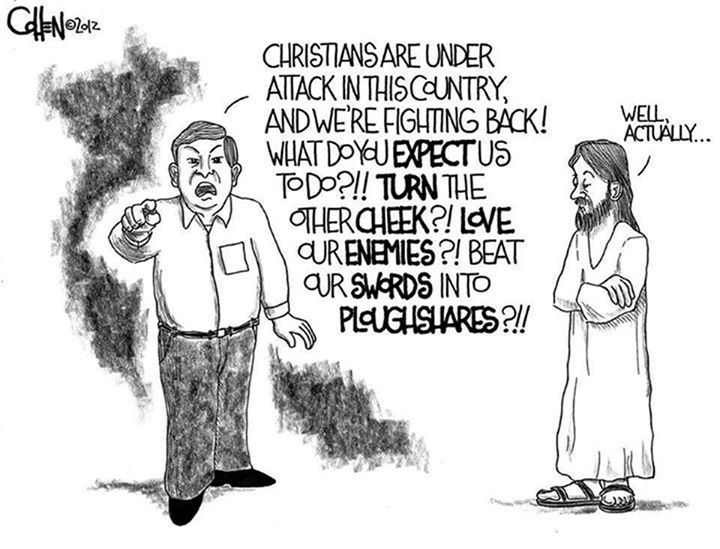 This political cartoon is old, but it came to my attention recently and it clearly has not lost its relevance. We can debate whether Christians are “under attack” in any meaningful sense anywhere in the English speaking world – being disagreed with is not an attack, and while there are instances of harassment, discrimination, and other kinds of attacks against Christians, it has to be noted that (1) these pale in comparison to the types of persecution Christians have faced at other points in history, and continue to face in other countries, and (2) Christians have legal protection to call upon when such things occur.

But more disturbing is that Christians are at least as likely to be the perpetrators of hostility and discrimination as the victims. And when persecuted, whether in reality or their imagination, many Christians fight back.

And so the irony is that the “Christianity” such individuals are “defending” is not the actual teaching of Jesus, but a tribal label altogether lacking in substance.

And so Christianity is under attack, first and foremost, by those who claim the Christian label, and yet have no idea what it means to be a Christian.

January 20, 2015 Doctor Who: The Seeds of Doom
Recent Comments
1 Comment | Leave a Comment
"There can be more than one anti-christ in an age (see 1 John 2:18) . ..."
David Trump as Antichrist
"Is it "Narcegesis” with an "e," emphasizing from the root word eisegesis, or "Narcigesis" with ..."
John MacDonald Narcegesis
"This is sad, the way it uses "making up our own minds" to support the ..."
James F. McGrath Not Liberal, Just Literate
"You don't think Extinction Rebellion are religious zealots?"
Scott Not Liberal, Just Literate
Browse Our Archives
Follow Us!