Doctor Who: The Seeds of Doom 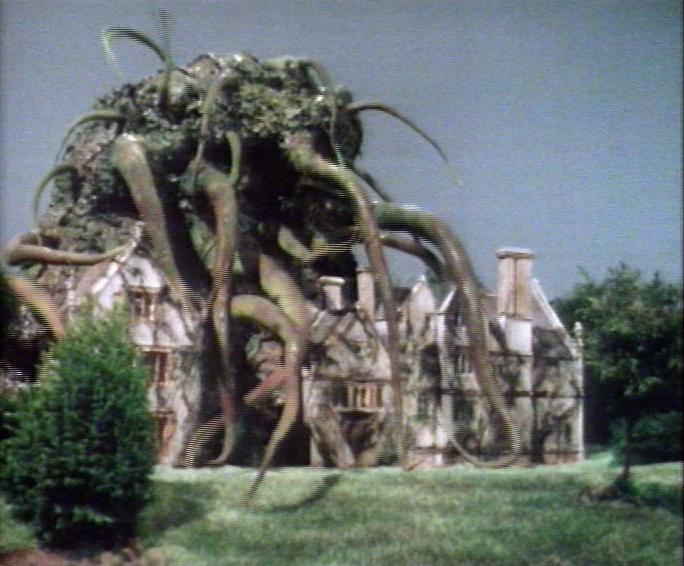 The Seeds of Doom

is an episode which explores yet another widespread sci-fi trope, namely spores which fall to Earth from space and have the potential to take over humans and overrun the planet. The episode also has elements of the typical spy thriller, including the Doctor getting into more fist fights than usual.

The discovery of Krynoid pods in Antarctica might not have led to anything very dangerous, were it not for the actions of humans. An eccentric and wealthy individual named Harrison Chase loves plants obsessively, and the idea of having a unique plant leads him to try to obtain it. The Doctor thus comments on greed as “The most dangerous impulse in the universe.” Chase views nature in a religious manner – he speaks of his “green cathedral,” sits in the lotus position, composes music including a “hymn of the plants” as well as a requiem. And when he envisages the plants taking over, he talks of this as the restoration of “paradise.” When the Krynoid takes control of him, the Doctor refers to him as “possessed.”

Hit man Scorby’s greed is also spoken of in religious terms, when he says that, when it comes to money, he and Chase are “of the same religion.” But Chase’s willingness to see the world become completely vegetable proves to be at odds with Scorby’s self-interest in survival.

That leads to additional point worth mentioning, namely the treatment of gender. While Scorby calls the guards who fled “women,” this is in marked contrast to Sarah Jane’s heroism. And although (and because) Scorby self-interestedly tries to save his own life, he dies, while the Doctor is ready to sacrifice himself to save others, and survives.

There is a tendency to idealize nature, especially in its pristine state. The Seeds of Doom reminds us that nature is not to be idealized – it is not to be treated lightly, but neither is it to view nature with an excessive religious awe which assumes that whatever is “natural” is better, or even good.

January 20, 2015 The Markan Mummy
Recent Comments
3 Comments | Leave a Comment
Browse Our Archives
get the latest from
Religion Prof: The Blog of James F. McGrath
Sign up for our newsletter
POPULAR AT PATHEOS Progressive Christian
1