Doctor Who: Genesis of the Daleks

“Genesis of the Daleks” is arguably one of the greatest episodes in Doctor Who history. It took a deeper look at the history of the Daleks, and also posed interesting moral questions.

The time lords send the Doctor and his companions to Skaro, at a time before the first Doctor’s visit in the show’s second episode ever. They have foreseen a future in which the Daleks become the dominant life form in the universe, and so they want the Doctor to do one of three things: prevent their evolution into the form in which we come to know them; make them less aggressive; or discover some inherent weakness.

On Skaro, we find the Thals and Kaleds fighting a war that has been ongoing for a long time. They thus utilize a mixture of futuristic and antiquated weapons, since resources are running out. The Kaleds are deliberately patterned on the Nazis: they speak of a future of peace and justice, to be achieved through the total extermination of the Thals. They banish “mutos” who have mutated as a result of chemical and radioactive weapons.

We are introduced to Davros for the first time, a scientist who is himself badly mutated and disfigured. He has determined what the Kaleds will mutate into in the future, as a result of their exposure to chemical weapons, once that impact has had its full effect on their genes. Davros has developed a machine that can allow mutated Kaleds not merely to get around, but become even more powerful.

At one point, the Doctor asks Davros whether, if he had the power to create a virus that would wipe out all life, Davros says that he would, since that would “give him power above the gods.”

The Doctor, by way of contrast, hesitates to commit genocide and wipe out the genetically-modified first batch of Daleks, who have been altered by Davros to be more aggressive and lacking in love, pity, and other emotions that might weaken them.

We see the Daleks refuse to show pity to the Kaled scientists even when Davros pleads with them, and they tell Davros that they are not programmed to take orders from inferior beings. Davros appears to have been exterminated at the end of episode, but of course he will return.

In the end, the Doctor doesn’t destroy the Daleks, but he does set them back. He says that he knows that out of the Daleks’ evil, something good must come. No justification is provided for this faith in “providence.” 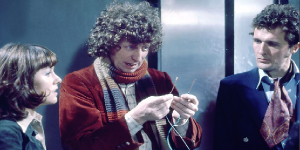 January 13, 2015 Downton Abbey and Churches
Recent Comments
5 Comments | Leave a Comment
"Thank you - all of this is very useful!"
James F. McGrath Cercetări în Istoria Propagandei Comuniste despre ..."
"Even if the speaker depicted believed that the Spirit was at work in Scripture, the ..."
James F. McGrath Come Compromise at Crooked Creek Baptist ..."
"Quite so. And yet …If you believe that there is some clear, well-understood definition of ..."
HematitePersuasion Conservative Christianity Isn’t Christianity
""Noteworthy is that the fallacy does not occur if there is a clear and well ..."
gadfly Conservative Christianity Isn’t Christianity
Browse Our Archives
Follow Us!