Matthew Cobb shared this entertaining infographic about when to use “tu” or “vous” in French: 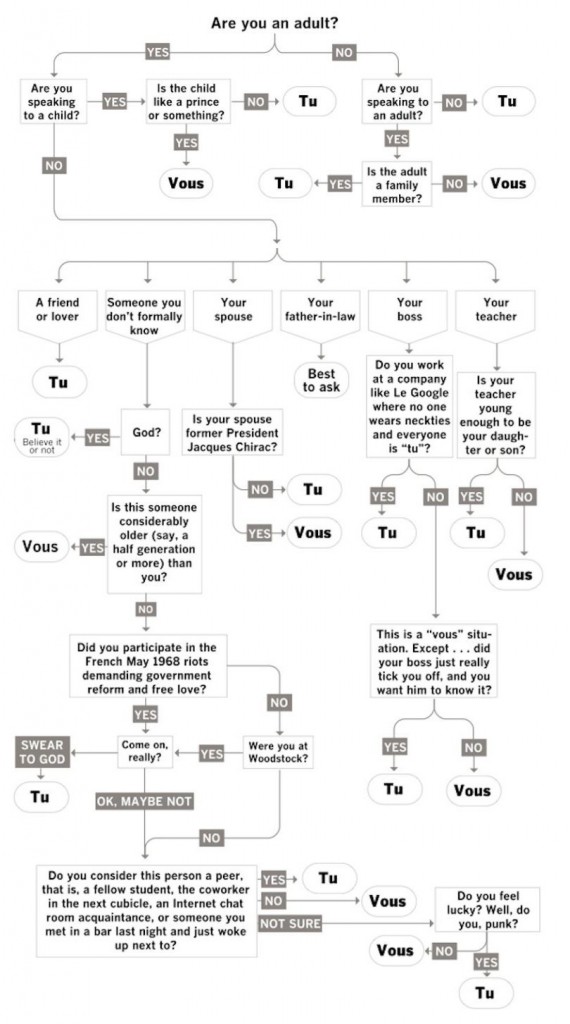 I am tempted to make one for Romanian, which would be much more complex. When do you use tu, voi, dumneata, dumneavoastră, and maria ta?

This is of religious and not just linguistic interest, as the infographic notes. God is addressed in Romance languages with the “tu” pronoun, and this should not surprise anyone who recalls that English used to have an equivalent pronoun, “thou.” Of course, as the latter ceased to be generally used in English, “thou” (or even “Thou”) came to have connotations of greater rather than lesser formality. And so today, if someone calls God “thou” they probably think they are paying greater respect.

I think the origin of this is that the modes of expressing formality by using the plural or a plural-based form of the second person pronoun are from later than, or other languages than, those in which the Biblical tradition was first expressed. But the result is interesting – one which makes people address God with less reverence than their boss.

January 15, 2015 Your Thesis Title
Recent Comments
2 Comments | Leave a Comment
"That's an interesting alternative. Personally, I have even more problem with the idea that only ..."
James F. McGrath Understanding Whiteness
"Thanks for sharing these resources! Resmaa Menakem talks about "people of culture" which feels helpful ..."
Lyndsey Understanding Whiteness
"‪Jacqueline Hill is so brilliant in this. Lexa could have been just an evil priestess ..."
Nathan Doctor Who: Meglos
"Who is this assumed "we" judged as "one" by those who benefit by the by ..."
Rafi Simonton Understanding Whiteness
Browse Our Archives
Follow Us!