I had been eager to see Interstellar for some time, and finally managed to see it in the IMAX theater at the Indiana State Museum on the last day that it was showing there. Spoilers ahead! 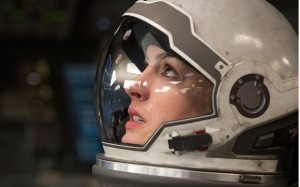 The film is quite a masterpiece in terms of its realization, its depiction of space and of other worlds (comparable with Gravity, for those who’ve seen it, but it also has a very 2001 feel). But it is also quite marvellous in its exploration of humanity’s future, managing to be both dystopian and utopian in certain respects. It envisages a situation in which crop after crop is failing and most humans are required to be farmers because of the situation. Corn is the one crop that is still thriving, but it cannot do so indefinitely.

There are several moments in the film that particularly struck me. One is when we learn that the approved textbooks teach that America faked the moon landings. The rationale behind it – that Americans need to believe that their government did not waste money on “useless machines” – makes the point well that what seems acceptable history depends not just on facts and data but ideology and context and usefulness.

Another is the discussion of whether nature is evil. One character suggests that it can be frightening and formidable, but it is never evil – even when it brings about the deaths of living things.

The idea is explored that love might transcend dimensions and give us a glimpse of some higher, future, transcendent mode of existence.

There is plenty of religious imagery, sometimes very explicitly, as with the Lazarus project, and one astronaut who, when brought out of cryogenic suspension, says that they literally raised him from the dead. 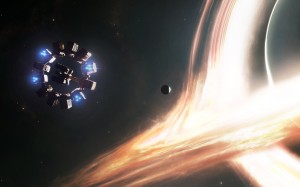 The movie connects with a chapter I am writing for a volume about Star Trek and philosophy. It is about the humanist theology of Gene Roddenberry, and explores (among other things) the extent to which his idea that humanity in the future becomes God and, in some sort of temporal loop creates itself, is reflected in the show.

In Interstellar, the biggest reveal late in the movie is that “they” (the beings that provided a wormhole for humanity in order to be able to find a new planet where we can live) are us. How that can make sense in terms of time travel paradoxes is no less puzzling than in any other case. Unless humanity survived to transcend time and space, then how could we send back a means to our own salvation in a time of desparation? But that issue is less of a complete plot disappointment than it might first seem. It might well be that humanity did survive anyway, through terrible struggles and suffering, and sent back a path that would spare more lives and help us reach that same goal, but with a smaller cost in human suffering and death.

The movie is one of the first in a long time to really get the viewer excited about the prospect of human exploration of strange new worlds. In that sense, as well as perhaps in its humanistic theology, I think that Interstellar comes closer to the utopian vision of Star Trek than any recent film or TV story in the science fiction genre for quite some time.

I thought the ending felt abrupt and hurried, even though it was almost three hours in the arrival. The movie didn’t seem long at all. But having Cooper leave so quickly to try to reach Brand, ignoring the grandchildren and great-grandchildren that he had only just discovered that he had, seemed implausible. Some indication that he had stayed to get to meet them, and then set off, would have seemed more plausible. But that’s a mere quibble about a film that I found deeply satisfying and at times inspirational.

What did you think of Interstellar?

February 11, 2015
LOST Rewatch: Through the Looking Glass
Next Post

February 12, 2015 Jesus, Save Me a Spot!
Recent Comments
10 Comments | Leave a Comment
"The discussion is not about changing weather but about the climate. I wonder how many ..."
James F. McGrath Not Liberal, Just Literate
"You believe the sky is falling? Why? The weather has always changed."
MCJ757 Not Liberal, Just Literate
"I pulled out an old book from my dad's bookshelf: "Those Incredible Christians" and its ..."
David Garshaw Peer Reviews, Pseudoscience, and Denialism
"Thanks for the preview James. I'm very excited about the book and the anticipation is ..."
Zera Preview the Mandaean Book of John
Browse Our Archives
Follow Us!