The Most Embarrassing Verse in the Bible

The Most Embarrassing Verse in the Bible March 25, 2015 James F. McGrath 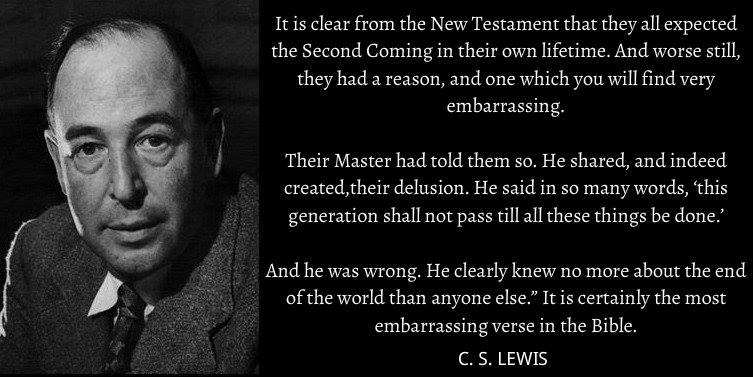 I saw the above quote on Facebook and wanted to comment on it, since it takes something that C. S. Lewis attributes to others, and treats it as though it were his own viewpoint. You can read a fuller excerpt here.

Lewis has a point that the inclusion of things that were difficult and uncomfortable provides a solid ground for arguing against the claim that these authors were simply inventing whatever suited them. But I don’t think that, for conservative Christians at any rate, makes the problem of Jesus’ wrongness on this topic any less serious.

And so the quote is extremely misleading when taken out of context. But ultimately Lewis is honest enough to acknowledge the problem. And this highlights that his outlook is often misconstrued as being more conservative than it actually was, both by those who quote him in their support and those who criticize him.