The episode begins with the Oceanic Six on the boat. Jack and Kate talk about Aaron and what to do about him. Kate says she wants to claim that the child is hers. Then, three years later, Kate is with Sun, and borrows some clothes. Kate leaves, and Sun gets a delivery. It is surveillance data, including photos of Ben and Jack, and also a gun hidden in a box of chocolates. Kate goes to see the lawyer who came to her. There is reference to “exchange of custody” and the lawyer tells her to prepare herself, as she is going to lose the boy.

On the island, Daniel describes what is happening to their brains because of the flashes as like “really bad jet lag.” Charlotte wakes up. Locke has their group head to the Orchid station, since he believes that if he can get the people who left to come back, it might stop the flashes. As they are walking, Locke sees the light from the hatch, and realizes when they are. Then they hear shouting. Sawyer sees Kate helping Claire to give birth. Then there is a flash. Afterwards, Locke and Sawyer talk about what they saw. Sawyer suggests that Locke should have talked to his younger self to save himself a world of pain. Locke says no, he needed that pain to get where he is now. When Miles develops a nosebleed, Dan suggests that the amount of time on the island might be an issue. When Miles says he has never been to the island before, Dan asks if he is sure. Later we learn that Miles is Pierre Chang’s son.

At the camp, they find kayaks with a bottle of water from Ajira airline. They set off, but then someone in the other kayak follows and shoots at them. (Could this have been the group that was on the Ajira flight that is traveling with John Locke’s body later in the season?) A flash comes and Sawyer says “Thank you, Lord.” But then they are in the middle of a huge storm, and Sawyer says, “I take that back.” When they get back to the shore, they find wreckage with writing in French. Then we see the French team find Jin, floating on some wood in the water. The next morning, he wakes up. He talks to the French team. The pregnant woman in the team introduces herself as Danielle Rousseau.

A man attacks Sayid. Sayid fights him off. The man had Kate’s address in his pocket. Ben goes with Sayid to get Hurley. He tells Jack to hurry as they are running out of time. Jack goes to Kate, who tells him about the lawyer trying to take Aaron. They follow him in her car. He goes to a hotel, and goes to see Claire’s mother. Jack wants to go into the hotel to talk to her, saying, “I can fix this.” He talks to her, and finds out that she doesn’t know about Aaron, she is just there to pick up a settlement from Oceanic. In the next scene, we see that the lawyer, Dan Norton, is Ben’s lawyer. Kate learns this. Sun is there, planning to kill Ben.

The mounting intrigue in the present day, combined with the promise to fill in the backstory of Danielle Rousseau and her team, all make this a great episode. Sawyer’s brief and quickly revoked prayer of gratitude fits nicely with the skepticism towards claims of fate, destiny, and divine promise which have been fostered throughout the show. 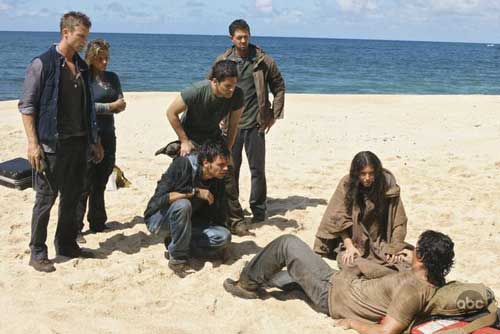 March 25, 2015
The Most Embarrassing Verse in the Bible
Next Post

March 25, 2015 The Bible and the Bechdel Test
Recent Comments
0 | Leave a Comment
Browse Our Archives
get the latest from
Religion Prof: The Blog of James F. McGrath
Sign up for our newsletter
POPULAR AT PATHEOS Progressive Christian
1