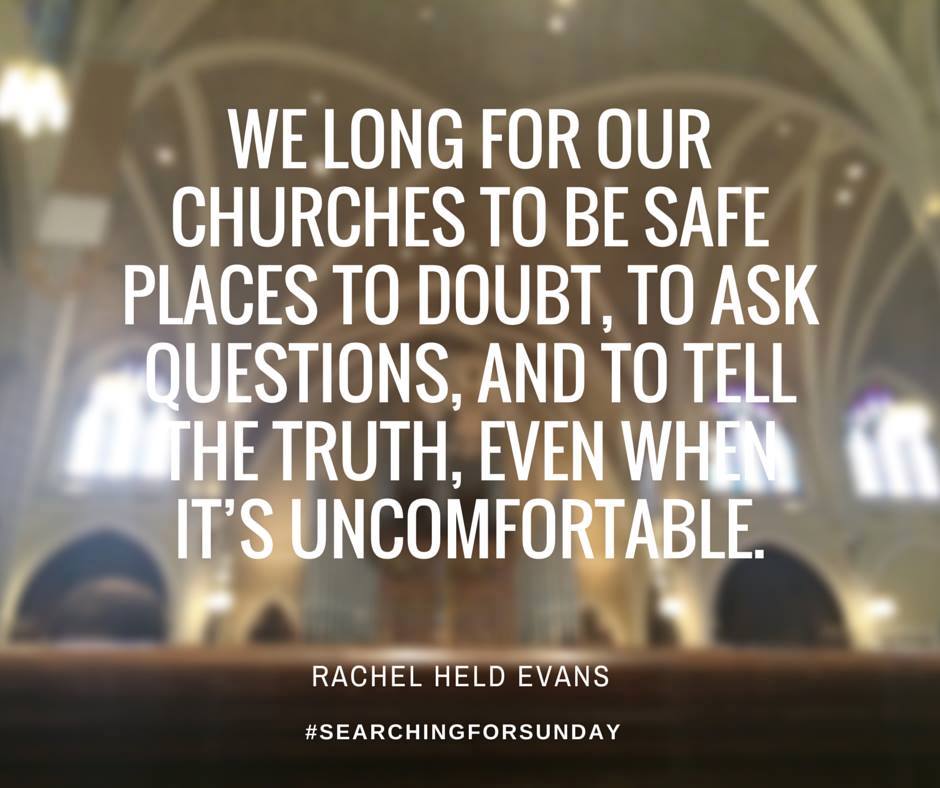 The above quote from Rachel Held Evans came to my attention soon after a New York Times article noted the misuse of “safe space” as an attempt to try to protect oneself in universities from uncomfortable ideas; and just before Andii Bowsher noted an article in the Telegraph about 38% of churchgoers keeping their liberal views on same-sex relations secret. Here’s an excerpt from what Bowsher wrote:

Now, what I find interesting is the implications about church life because 38% is a big proportion when we are considering something like feeling unable to express views. But when I think about it I can understand, I suspect, the dynamics. It’s probably a bit like what I hear some Muslims saying about expressing less conservative views in Mosque influenced communities. That they feel that the religious discourse space is owned by the conservatives and that they do not feel sufficiently empowered religiously to gainsay the official statements. Perhaps because they don’t have a sense that they may be more than a small minority allied with the sense that the tradition seems to favour the conservative interpretations and that those who hold those interpretations hold the influential positions by virtue of having been through the system and in position because they are entrusted with it.

I’ve also been inside systems where a particular line has been dominant and where it is difficult to speak a different perspective. Those who are already in positions of respect and trust by dismissing or even ridiculing, or perhaps even aggressing against ‘unsound’ opinions and maybe even people. This is a very strong signal to others in the community to discount or even take ostracisitive actions. This means that at the very least the ideas are discounted and quarantined and those holding them are dismissed or even ridiculed. All of which functions as a fairly effective social control.

The worrying thing, of course, is that it inoculates dominant perspective holders from considering issues that may actually be helpful for them in the longer term (whether or not they end up agreeing)…All of which makes me wonder about whether we can work, as churches, on better ways of disagreeing. It seems to me that derision, abuse, dismissal and ostracism of people who disagree is not loving our neighbour as ourselves. I can scarcely think it possible that any of us, finding ourselves wishing -even compelled- to express a minority viewpoint or disruptive idea would want to be on the receiving end of the disdain or outright abuse that Steve Chalke saw (and I saw directed at him on Twitter and Facebook). And the consequence of that observation is that if we wouldn’t want that ourselves, why do we think we have a right to pass it on to others?

More, we should ask ourselves how we would like to be treated given that we could be wrong: how should those who disagree correct us? Well, isn’t that the way we should offer to correct others? All of which says that churches should be communities where we disagree humanely, with a desire for the good of the other and with a teachable humility because we could ourselves have something to learn. The 38% who don’t feel able to say what they think are a testimony to us as churches that we still have a way to go on this.

Would that churches, perhaps driven by the teaching of the New Testament, could become safe spaces in that latter sense. Places where one can honestly say what one thinks and know that, while others may disagree, they will treat you as they themselves want to be treated.

I have been working through 1 Corinthians in my Sunday School class over recent weeks, and I was struck more than I had been previously by some of the things Paul says. When he talks about being the temple and destroying the temple of God, he is speaking about the community as a whole, and not about individuals. And so when he talks about different Christians workers, like himself or Apollos, possibly building with different kinds of materials, he is depicting them as building, and it is for God to judge their work.

But the Corinthian Christians who were siding with Paul or Apollos and dividing the church were tearing down the temple of God, and to them he issues the warning that whoever destroys God’s temple, God will destroy them (1 Corinthians 3:17).

Many Christians today seem to think that tearing a congregation – and one another – apart is the way to defend God’s truth.

Paul had a different view. He said that “My conscience is clear, but that does not make me right/innocent. It is the Lord who judges me” (1 Corinthians 4:4). Perhaps because he previously persecuted the church with a clear conscience, Paul is aware that one can be sure one is right, and yet later become convinced that one has been profoundly wrong.

March 26, 2015
The "Religious Freedom Restoration Act" Is Now Law In Indiana: How Should We Respond?
Next Post