The “Religious Freedom Restoration Act” Is Now Law In Indiana: How Should We Respond?

The “Religious Freedom Restoration Act” Is Now Law In Indiana: How Should We Respond? March 26, 2015 James F. McGrath

The governor of Indiana Mike Pence has signed the “Religious Freedom Restoration Act” and made it law in Indiana. While legal experts have argued that similar legislation in other states has yet to be used successfully to justify discrimination, many are still concerned.

My question at this stage is how progressive Christians and others concerned about social justice and equality should respond to the legislation, and perhaps protest it. For instance, if someone thinks that this legislation causes harm in ways that are against their religious beliefs, can they refuse to pay taxes that would fund the salary of a governor who would pass legislation like this?

The answer is “probably not,” just as it is unlikely that anyone could effectively use legislation like this to justify discrimination, since the case has already been made that the government has the right to protect people from discrimination even when the latter is purportedly justified by religion. The real problem with this legislation is that it puts the onus on the government to justify in each and every case that it has a justified reason for “burdening” the religious freedom not just of individuals, but of private corporations. And so, even if current laws ultimately protect victims of discrimination, the new legislation will probably at the very least lead to costly legal battles before those laws are upheld in a variety of specific cases.

Rabbi Sandy Sasso makes a comparison with the Nuremberg Laws in Nazi Germany, and writes the following:

Of course, you will have every right to sue the paramedic in court for damages seeing that he refused to treat you because of the pro-gay marriage logo on your tee-shirt. Or the Muslim headscarf on your head.

In court, however, said paramedic will be able now to invoke RFRA in his defense. And the burden of proving in a court of law a “compelling governmental interest” of the paramedic providing treatment will be on you, a burden likely to be substantial both in monetary and opportunity cost. You might have some luck crossing the Red Sea, as it were, in front of a sympathetic, rational-minded judge. Just don’t wind up dead first.

What do we do now? Any suggestions? 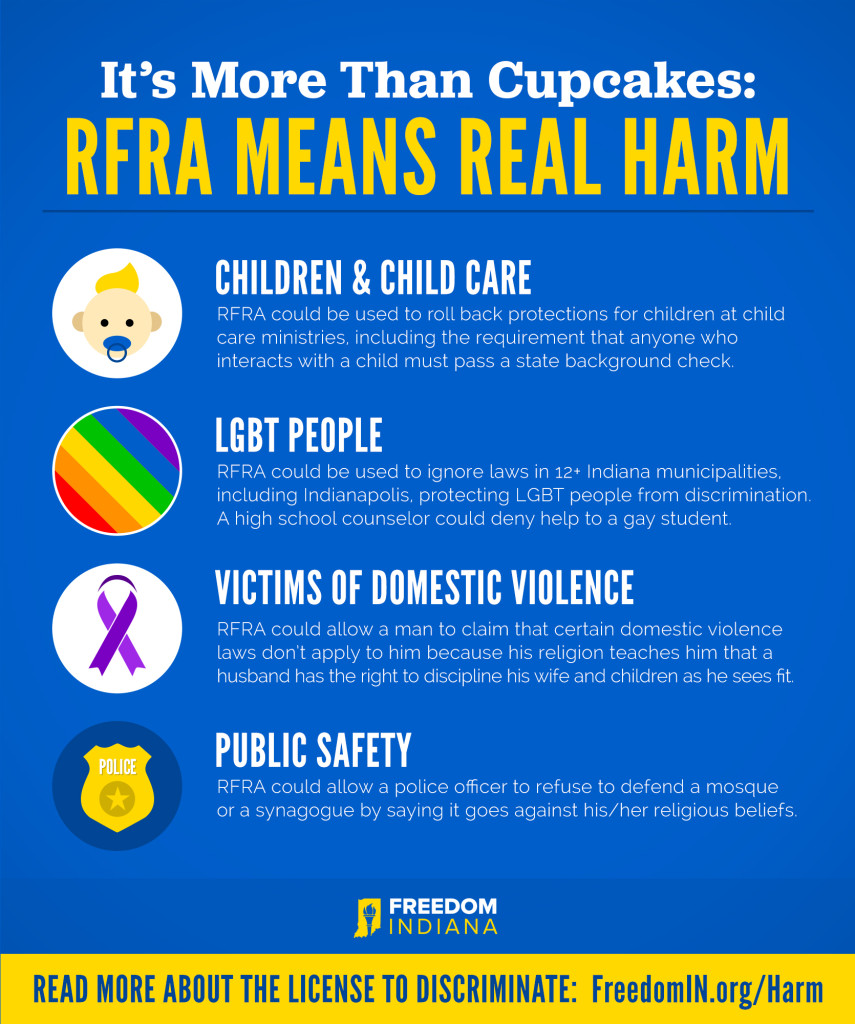 March 27, 2015 Churches: Safe Spaces or Self-Destructing Temples?
Recent Comments
103 Comments | Leave a Comment
Browse Our Archives
get the latest from
Religion Prof: The Blog of James F. McGrath
Sign up for our newsletter
POPULAR AT PATHEOS Progressive Christian
1