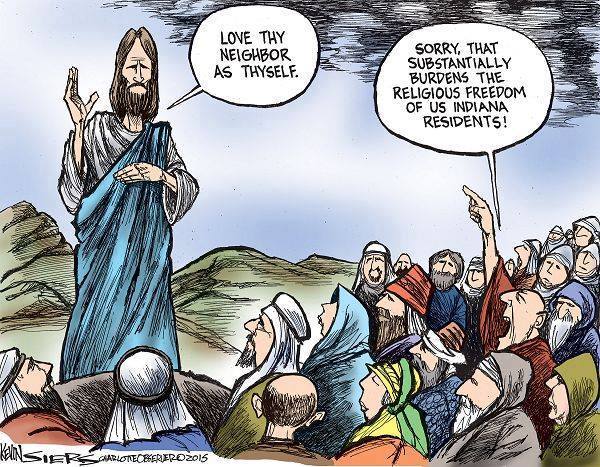 I think this political cartoon makes an excellent point. Various things may or may not be legal, but if one is a follower of Jesus, it can be argued that his teachings burden our religious freedom. To quote Paul, “All things are lawful – but not all things are beneficial.” Christians may have the right to refuse service based on the dictates of our conscience. That doesn’t necessarily mean that we should, or that Jesus would want us to.

I object to legislation that makes it legal to put up a “no gays allowed” sign, even if no one were to do so despite its legality.

And the notion that American Christians, living on land stolen from others, buying cheap goods made by underpaid workers, buying gas which is connected to our support for the oppressive regime in Saudi Arabia, suddenly become complicit in evil when they bake cakes for a wedding that is not in line with their beliefs, is reprehensible nonsense.

We are entangled with injustice and unrighteousness in all sorts of ways. It is telling to me that many conservative Christians chose to stop sponsoring starving children through World Vision because it indicated a willingness to accept gay and lesbian Christians. Not all conservative Evangelicals have those sorts of priorities. But some do. And yet somehow I can’t see Jesus causing harm to children in order to exclude people. It seems to me an example of managing to be as unlike Jesus as possible, in two different ways simultaneously.

Jesus burdens us. He calls us to give up our freedom. And yet those who embrace this challenging path of love find that his burden is lighter than that of hatred which we once carried.

April 1, 2015 A Slight Gust of Wind
Recent Comments
189 Comments | Leave a Comment
Browse Our Archives
get the latest from
Religion Prof: The Blog of James F. McGrath
Sign up for our newsletter
POPULAR AT PATHEOS Progressive Christian
1