The claim that the Bible is inerrant, and in particular that the manuscript tradition used by the King James translators was divinely preserved so as to avoid error, is implausible for a number of reasons. But there is one simple fact that is particularly relevant:

There have been Bibles which contained typos.

Of course, anyone who has studied the manuscript history of the Bible’s transmission will know that there have been copying errors.

But that involves making mistakes when copying by hand. I am talking here about typos in the strict sense: errors in the typography, in the printing process. There have been many, and that is no surprise unless one implausibly insists that people involved in writing, copying, and printing the Bible were somehow rendered foolproof. Even printings of the King James Version have had errors – too bad for the KJV-only crowd.

Josh Mann shared a number of examples a while back, after a Washington Post article appeared which drew examples from a famous article by Bruce Metzger. Peter Head also mentioned it. Here are the major examples given in the WP article:

…The Folger Shakespeare Library has a King James Bible with the same error in Matthew 26:36. In that case, the printers covered the mistake by pasting a little piece of paper over “Judas.” This edition, with this mistake, is often called the “Judas Bible.”

…There’s the “Wicked Bible,” a 1631 London King James printing in which Exodus 20:14 reads:  “Thou Shalt commit Adultery.” (There’s a pretty crucial “not” missing there.) “In that case the printers were fined and ordered to destroy the copies!” according to Fraas. Some copies survived, thankfully.

A 1612 edition of the King James, fittingly, reads: “Printers have persecuted me without cause.” That line, from Psalm 119:161, should say “princes,” not “printers.”

There’s a 1682 edition of the King James that was just an unholy mess. In Deuteronomy 24:3, it said “if the latter husband ate her” instead of “hate.” It read “kings” instead of “keepers” in Esther 6:2. And Jeremiah 13:27 reads “adversaries” instead of “adulteries.”

There’s more: Jeremiah 16:6  substitutes “glad” for “bald,” so the line reads: “Both the great and the small shall die in this land: they shall not be buried, neither shall men lament for them, nor cut themselves, nor make themselves glad for them.”

…A 1950 Old Testament printed by the Episcopal Committee of the Confraternity of Christian Doctrine claims that the skunk, and not the skink (a type of lizard), is an animal that swarms upon the ground in Leviticus 11:30.

And a 1966 Jerusalem Bible says “Pay for peace” instead of “pray for peace.”

“Printers have persecuted me without cause” is probably my favorite of the bunch. Which is yours? Are you aware of others? 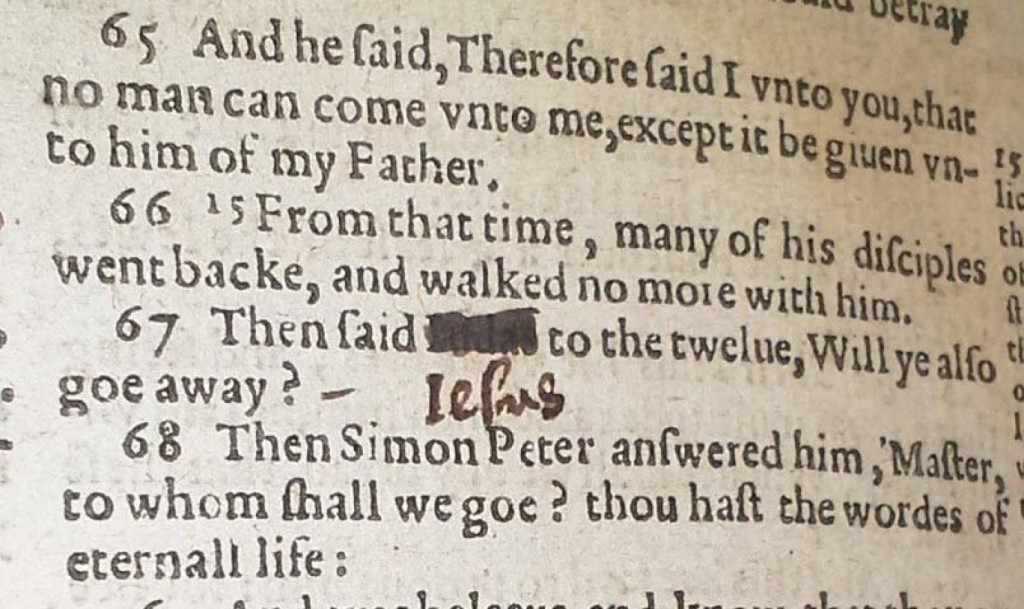 The photo above of the hand-correction of “Judas” to “Jesus” comes from the University of Pennsylvania’s Library and was taken by Mitch Fraas.

April 30, 2015 Exploring Our Matrix On Mobile Devices
Recent Comments
3 Comments | Leave a Comment
"Brilliant perspective. It is not surprising that the fundamentalist political right-wing imports fundamentalist religious zeal ..."
robrecht Qx2: Comparing Anonymous Sources and their ..."
"Time to apply Occam's razor!"
Zeigler John Prove It
"As a foreigner looking at American politics, I'm bemused at how similar both sides are ..."
Harold Porter Prove It
"Thank you for pointing out that I hadn't finished that thought, or that something got ..."
James F. McGrath Warning Labels for Christianity?
Browse Our Archives
get the latest from
Religion Prof: The Blog of James F. McGrath
Sign up for our newsletter
POPULAR AT PATHEOS Progressive Christian
1