It is an older article, but Jennifer Raff’s piece on differentiating between science and pseudoscience only came to my attention recently (despite the fact that it quotes Doctor Who in the process of making its point!). It suggests the following ranking of sources: 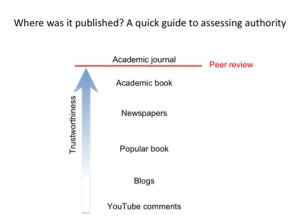 I don’t think anyone would disagree about placing YouTube comments at the bottom.

But I think the others deserve discussion. On the one hand, academic journal articles do tend to have the most rigorous level of review prior to publication, although academic monographs may also be peer reviewed.

My issue with the placement of journals at the top has less to do with the level of scrutiny prior to acceptance, but with the kind of information one will find in them.

If you are looking for the latest proposals, which may or may not withstand subsequent scholarly scrutiny, then the latest articles in academic journals are the place to look.

But most people who are not themselves engaging in cutting-edge academic work tend to be seeking a different sort of information: the state of our knowledge in a particular field, on a particular topic.

That sort of information is more likely to be found in a widely-used textbook than in the latest article, and arguably has a higher degree of authority, since it reflects the consensus of scholars, and not the argument of one individual trying to break new ground.

The other issue I had was with the low placement of blogs. Certainly, blogs can be no better than YouTube comments. But I wonder how one ought to rank the blogs of scholars in comparison with newspaper articles. In the latter, you get a journalist writing about a subject outside their expertise, hopefully after having interviewed scholars and other relevant experts. But on scholars’ blogs, you get the scholars expressing themselves in their own words. Isn’t that better than having scholarship mediated through a journalist?

When one adds to this the fact that any distinction between “blog” and “newspaper” is being blurred in the present day, and I think there is reason to say that the authority of a blog depends on who is writing it.

And so perhaps that is the key takeaway point that the diagram correctly makes. Writing by an identifiable author is better than something anonymous. And writing by an expert is better than writing that gives you the views of experts mediated through the writing of someone else.

What do readers of this blog think? Feel free to disagree with my arguments here – after all, this is only a blog post!

Let me conclude by saying that the post by Raff is on the whole a very helpful guide, despite my quibbles, inasmuch as it emphasizes that even the fact that something is in a book does not make it trustworthy, and that we need to take the time to fact-check, look up sources, and in other ways make efforts to avoid being deceived.

Let me also link to a recent article in The Straits Times, which makes a related point: that academic journal articles are read by few people, and so scholars ought to be writing blog posts and op ed pieces as well as peer-reviewed scholarly publications.

April 13, 2015 The Criterion of Mortification
Recent Comments
21 Comments | Leave a Comment
"I liked the new song. The music is contemporary enough that it could fit into ..."
Phil Ledgerwood Announcing P4: The Panentheist and Progressive ..."
"Indeed, there is a need for worship music that reflects a progressive religious perspective. I ..."
Keith Sanford Announcing P4: The Panentheist and Progressive ..."
"And wasn't this a conspiracy theory?https://www.cnn.com/2021/01..."
Nimblewill Evangelicals and the Big Lie
"I have heard this. So what if aliens aren't a conspiracy theory? Do you believe ..."
Nimblewill Evangelicals and the Big Lie
Browse Our Archives
get the latest from
Religion Prof: The Blog of James F. McGrath
Sign up for our newsletter
POPULAR AT PATHEOS Progressive Christian
1