The episode begins with Jacob’s visit to Ilana in the hospital. The continuation shows Jacob asking her to protect the six remaining candidates. She asks what she should do after bringing them to the temple, what she should do next, and he tells her to ask Ricardus. On the island, Richard says that he has no idea what they should do next. He says they are all dead and in hell. He says maybe it is time to stop listening to JCob and to start listening to someone else. Then he grabs a torch and leaves. Ben says RichRd doesn’t know anything, saying he has known him since he was 12. The fact that he does not age comes up, and that leads to the telling of his backstory. 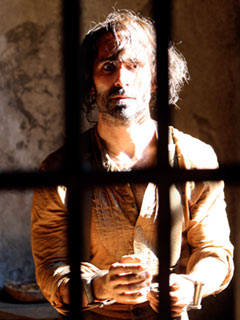 The story then moves to the Canary Islands in 1867. Richard returns to his wife Isabella who has a fever. She coughs up blood, and he runs to get a doctor. She gives him a mecklace with a cross on it, to give to the doctor. The doctor refuses to help, and in struggling with him, Richard accidentally kills him. He runs with medicine but his wife is dead. Men come and arrest him for killing the doctor. A priest comes to visit him in prison, and finds him reading an English Bible. He tells of their plan to go to the New World and start a family. He confesses the murder to the priest, but the priest says he cannot obsolve him for murder, even if it was accidental, and since he will hang tomorrow, he has no time to do penance. The devil waits for him in hell, he is told. But then a Mr. Whitfield is looking for someone who speaks English, and buys him for Captain Magnus Hanso. He is taken onto the ship The Black Rock, and in a storm they see the statue on the island. A huge wave brings them crashing into the statue. When they awake the next day, a fellow slave says that God has spared them. But one of the officers, aware of their limited fresh water and supplies, and that the slaves might try to kill them, starts killing the slaves. But before he can kill Richard, the smoke monster attacks. It finds him alive in chains and reads his mind. Richard prays, and when he opens his eyes it is gone. Days later, he sees Isabella. She says they are both dead and he is there to save him from the Devil. She asks if he has seen it. He says he thinks so. The smoke monster is heard outside. She seems to be taken by it. Later, in the form of Jacob’s brother, Smokey gives him water. He says he is a friend. He asks if he is in hell, and Smokey says yes, he is afraid he is. He says he is afraid that “he” has her. He says he wants to be free too. He makes Richard promise to do anything he asks before unlocking his handcuffs. He says “It’s good to see you out of those chains.” He says that he will need his strength to escape, and that there is only one way to escape from hell: he is going to have to kill the devil. He gives him a knife, saying that he needs to drive it through his heart. If he has a chance to speak, it will be too late – precisely the imstructions Dogen gave to Sayid. He says that he is the black smoke, and that the devil betrayed him and stole his humanity, Richard finds the remains of the statue, the Black Rock having smashed most of it to pieces. Jacob attacks him first. When Richard insists that he is dead and in hell, Jacob submerges him in the water. When Richard says he wants to live, Jacob says that is the first sensible thing he has said. Then they talk. Jacob says he is not the devil, and that he brought the ship to the island. Jacob holds a bottle of wine, saying that the wine is like hell or malevolence, and this island is the only thing keeping

He says that the man he met in the island believes that all people are corruptible. Jacob brings people there trying to prove him wrong. He says that he wants them to learn right and wrong without his help. He offers Richard the job of being his intermediary. Richard asks for his wife back, and then asks for forgiveness of his sins so that he will not go to hell. When Jacob cannot offer either, he asks not to die, and Jacob says that he can do that. He is then sent back to the man in black with a white rock. Smokey gives him his wife’s necklace and says that if he ever changes his mind, his offer still stands.

Back in the present, Richard says he has changed his mind. He digs up his wife’s necklace, which he had buried. But Hurley tells him that isabella his wife sent him, and that she wants to know why he buried her cross. She says it was not his fault she died. When he says he would do anything for them to be together, she says they are already together. Richard puts the cross around his neck, and thanks Hurley. She then gives him one more message: he must stop the man in black, or we all go to hell.

At the end of the episode, Jacob and the man in black talk. The latter wants to leave and Jacob says as long as he is alive he won’t allow that. Jacob’s brother says that is why he wants to kill him. He says if he kills him, someone else will just take his place, and he says that he will kill them too.

The first time I watched the episode. I do not think I realized just how much Jacob’s words to Richard sound like the view traditionally attributed to God: not wanting to tell people what to do, but wanting them to discover the right way for themselves. Take a look at the transcript of the episode to see it in more detail and more precisely. I also found myself wondering whether the light/energy beneath the island, of which people have a little inside themselves and always want more, is not supposed to represent malevolence rather than something else. It is that which becomes intensely infused into Jacob’s brother when he is thrown into the cave of light, in a backstory that we will soon learn about. And so perhaps it is the release of that concentration of malevolence that Jacob hopes to prevent. 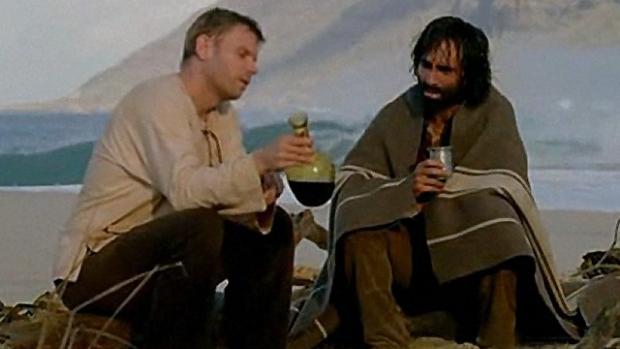 April 23, 2015 80s Rock Music for Worship
Recent Comments
0 | Leave a Comment
"I have issues with Blink, but they are very much not "what's a good starting ..."
Scurra Doctor Who: Full Circle
"Here's a question about Jesus being given a dishonorable burial, and whether this story element ..."
John MacDonald Revisiting the Empty Tomb
"Actually when one learns more about genealogy one discovers that this kind of interconnectedness, far ..."
James F. McGrath Powers and Principalities in the United ..."
"Since Isaiah 53 isn't about Jesus in its original context, it doesn't seem as though ..."
James F. McGrath Jesus according to AI
Browse Our Archives
get the latest from
Religion Prof: The Blog of James F. McGrath
Sign up for our newsletter
POPULAR AT PATHEOS Progressive Christian
1