The episode begins with young Miles, whose mother is looking for an apartment for them. He demonstrates his ability to hear the dead talking, finding an older man who had died in one of the apartments there. When he is a teenager, Miles talks to his dying mother, asking how he came to be the way he is, able to do the things he does, and who his father is. She says that his father never cared about them and kicked them out. When he asks her where his body is, she says that it is somewhere that he can never go. When he is older, we see him contacted by Naomi Dorrett, who says that her employer has been following his work. She takes him to a corpse and asks him to “audition.” He is able to say that the man’s name was Felix and that he was going to be delivering papers to someone named Widmore. She offers him $1.6 million to help track down a killer, expecting that the people that man killed may be able to give Miles information to help track him down. Later, Miles is grabbed by one of the people who will later be on Ajira 316. He asks him if he knows what lies in the shadow of the statues, and because he doesn’t, he is told he is not ready to go to the island. 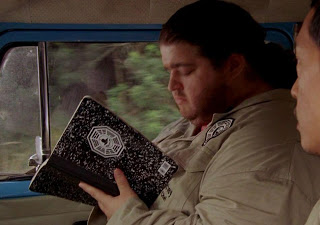 In the Dharma Initiative, Miles is brought into Horace’s circle of trust, and given something to take to Radzinski in a zone where the Dharma people are not supposed to be. Radzinski gives Miles the body of someone who had been shot in the head, to take back to Horace. Miles asks the dead man what really happened. Later, Horace tells Miles to bring the corpse to Dr. Chang at the Orchid. Hurley goes along for the ride. When Hurley discovers that Miles can talk to dead people, Hurley says he will keep his secret, since he can talk to dead people too. Miles says that he can only sense what people thought before they died, and not chat with ghosts. We learn that Dr. Chang is Miles’ father. And we get to see the secret building site. Hurley watches as they hammer the serial number onto the hatch that will eventually go on the Swan station. We also learn that Hurley has been writing the script of The Empire Strikes Back, with some improvements, planning to send it to George Lucas.

One of the security people, Phil, finds the tape showing Sawyer taking Ben, and so goes to ask him. Sawyer punches him and asks Juliette to get rope. Miles sees Dr. Chang reading to his younger self as a small baby. The episode ends with Daniel Faraday returning to the island.

My biggest issue with this episode is with what Hurley said. Ewoks don’t suck.

The strongest religious element is arguably not when Roger flippantly dismisses the idea of sitting around praying for his son Ben to be alright. It is rather in the emphasis on giving second chances to those who have wronged us, especially when they are our parents.

April 3, 2015 The Burial of Jesus
Recent Comments
0 | Leave a Comment
Browse Our Archives
get the latest from
Religion Prof: The Blog of James F. McGrath
Sign up for our newsletter
POPULAR AT PATHEOS Progressive Christian
1