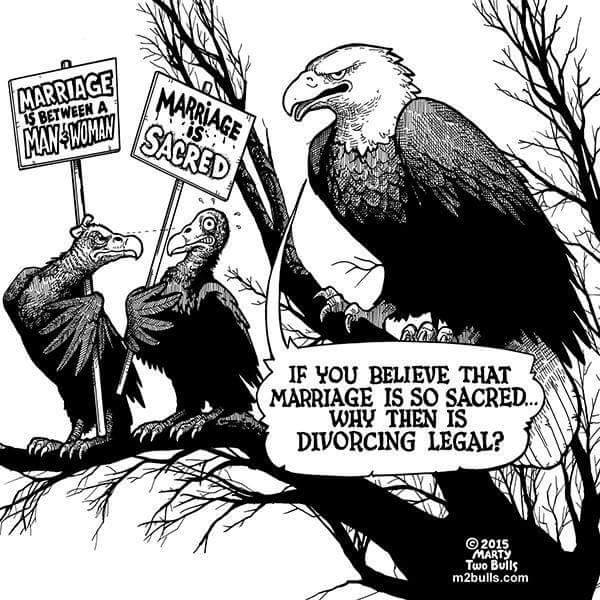 I talked about this topic in my Sunday school class this past Sunday, as we reached the treatment of divorce in 1 Corinthians 7. Different phrases are used in our time – “Biblical marriage,” “traditional marriage,” “the sanctity of marriage.” All of them are used largely synonymously, and hypocritically. Tackling divorce would defend the New Testament’s teaching on marriage. But attacking the right of others to marry, using Scripture as an excuse while refusing to live by its teachings about marriage in a consistent manner, is shameful hypocrisy.

I wonder how those who use this language can think their hypocrisy is not visible to most people. Have they managed to deceive themselves? It doesn’t take much investigation to recognize that the institution of marriage discussed in the Bible is one that is assumed rather than introduced there. We find in the Bible no instructions on how people become married, no liturgy for a wedding ceremony. The patriarchal form of marriage is assumed as a social institution, and all that we find are stories and laws which reflect it, and ethical teachings which call upon people with certain values to approach this social institution in particular ways.

Hardly anyone today in North America practices the ancient institution of marriage as it was understood thousands of years ago, or even traditional marriage as it existed a few hundred years ago as reflected in period dramas. And that is not as “unbiblical” as might first appear.

If there is a core principle about marriage in the Bible, it is arguably that found in Genesis 2. It is a story which Jesus recognized for what it is, a non-literal depiction of marriage. The story is literally about one person becoming two, but it explicitly states that it is symbolic and is really about two people becoming one.

Companionship, that experience of finding one’s other half, is the universal that spans the ages. And, for those interested in applying such biblical principles to the present day, it is an experience which is not limited to people of opposite gender.

And so let’s defend the sanctity of marriage. Let’s emphasize fidelity, love, and companionship, as Genesis does. And let us do so in a way that is not about male and female, slave and free, rich and poor, as marriage has traditionally been.