The episode begins with someone watching Smokey’s camp through night vision goggles. Then Smokey talks to Jin, saying that the only way for them to leave the island is for the remaining candidates to leave together with him. This makes sense, since Jacob arranged for his brother not to be able to leave not only as long as he lived, but also as long as his replacement lives, and so if all the candidates leave then so can he. Sayid tells Smokey that he does not feel anything – no anger, no pain, nothing. Smokey says maybe it is for the best, and will help him, get through what’s coming. Smokey leaves, and then a team of Widmore’s people use darts to knock people out and then take Jin. Meanwhile, Smokey goes to Sun and says that he has found her husband. He asks her to come with him. But she runs off and hits her head. Smokey leaves her and goes back to his camp, where he finds his people unconscious. Meanwhile, Jin has been taken to Room 23 where we earlier saw Karl being held. Zoe says the Dharma Initiative did experiments on subliminal messaging there. She shows him a map he made when he worked for the Dharma Initiative, showing pockets of energy on the island. He says he wants to talk to Charles Widmore, and she says he wants to talk to him too. Smokey sets out with Sayid to recover Jin. On Hydra Island, Widmore has a sonic fence set up. Widmore says what he knows about him are a combination of ghost stories and noises in the night. But Smokey says he must know more than that, judging by the sonic fence. He quotes him, having said that war was coming to the island, adding that he thinks it just got there. We learn that the timetable has been sped up, and that Zoe is a geophysicist. Widmore tells Zoe to get the package. Then he gives Jin a camera of Sun’s that they found on the plane, it has photos of Ji Yeon, his daughter whom he had never seen. He says that if Smokey ever gets off the island, all the people they love will cease to exist. We learn that the “package” is not a what but a who – Desmond Hume.

Richard and Hurley return to Jack, Sun, Ilana, Ben, and Miles. Richard says they need to destroy the Ajira plane. Sun doesn’t want the plane destroyed. Jack tells Sun he will help her find Jin and get off the island.

In the afterlife, Jin and Sun are not married, we learn as they check into a hotel under separate names. But later we learn that they are having a relationship. The next morning in bed together she suggests running away together. Jin says he wants to be with her and loves her. There is a knock at the door, and when Sun answers it, it is Martin Keamy. He wants his money, so he brings them to Mikhail to translate. Sun offers to get money from the bank, since the money they had with them was confiscated at customs. But her father closed the account. It turns out that the $25,000 was Keamy’s fee to kill Jin, since Mr. Paik had found out about the relationship between Jin and his daughter. We then see Jin locked in the restaurant freezer as we had seen in a previous episode. Sayid finds him and gives him a blade to free himself, wishing him good luck. Mikhail brings Sun to the restaurant, and finds the bodies. Then Jin holds a gun to Mikhail. He shoots him in the eye. But Sun has been shot and as Jin carries her to find help, she says she is pregnant.

It was great to see the story circle around to Desmond playing a decisive role. One could argue that the entire show is the story of Desmond and the island, with others being incidental to it. Perhaps that is one of the most challenging messages of LOST – the snippets of story that we know are never the whole story, and sometimes where our attention is focused is not where the most important things are happening. 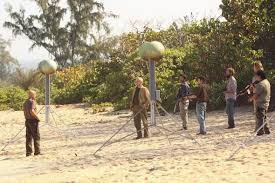 April 21, 2015 Genesis 2 is Not Literal (The Bible Tells Me So)
Recent Comments
0 | Leave a Comment
"Yeah, do Calvinists even bother with the Problem of Evil? It’s not clear to me ..."
Beau Quilter Because of the Fall: More on ..."
"One last thought."The first being last and the last first" may also explain Mark portraying ..."
John MacDonald Revisiting the Empty Tomb
"Opponents may have latched onto the dishonorable burial issue, not recognizing in Mark it was ..."
John MacDonald Revisiting the Empty Tomb
"On the other hand, another possibility is that Mark invented the dishonorable burial and introduced ..."
John MacDonald Revisiting the Empty Tomb
Browse Our Archives
get the latest from
Religion Prof: The Blog of James F. McGrath
Sign up for our newsletter
POPULAR AT PATHEOS Progressive Christian
1