Genesis 2 is Not Literal (The Bible Tells Me So) 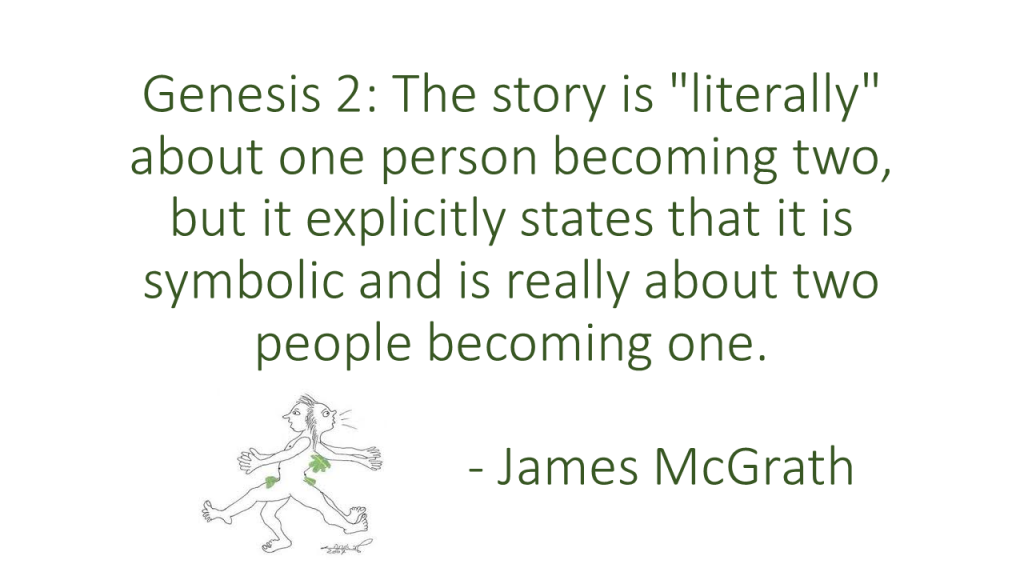 The quote comes from my recent post “Marriage is Sacred.” The point is one that I have made before, but since someone particularly liked this brief way of making the point, I thought I would turn it into a meme image.

Of related interest, Andrew Perriman has a whole series on the idea of “one flesh” in Genesis and the ways that text might apply, when interpreted contextually, to the issue of same-sex marriage. In one post, highlighting that sex is not the focus in Genesis 2, he notes that it is the similarity of the woman to the man, and not her difference from him, that is highlighted. That post is part of a series about a book by James Brownson, Bible, Gender, Sexuality: Reframing the Church’s Debate on Same-Sex Relationships

. Here is a link to Andrew’s summary of the book’s argument. He also focuses particular attention on Paul’s argument in Romans, and the eschatological context of Paul’s perspective.

Also related to this is Lucy Peppiatt’s book about 1 Corinthians, which Scot McKnight and Derek Leman have blogged about: Women and Worship at Corinth: Paul’s Rhetorical Arguments in 1 Corinthians

. The point made in that book in relation to 1 Corinthians is much that which has been made about the section in Romans 1 which is often quoted in relation to homosexuality. I have blogged previously about the fact that Paul may there be adopting the persona of someone else’s view, in order to then turn on that person and rebuke them.

But attention to individual passages risks missing the point, much as debates about the household codes in the New Testament epistles missed how the key principle of the Golden Rule leads naturally to a rejection of slavery. Genesis says that it is not good for human beings to be alone, that it is one of the joys of life to find one’s other half. With that as a core principle, Christians should not be trying to prevent people attracted to members of the same sex from experiencing that joy.