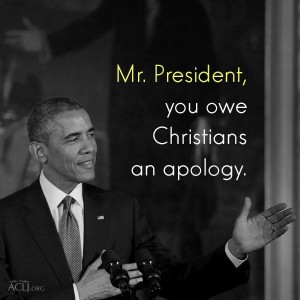 I saw an image today on Facebook (included here on the right), indicating that there are people who are still saying that President Obama “owes Christians an apology” for having said at a recent National Prayer Breakfast, “And lest we get on our high horse and think this is unique to some other place, remember that during the Crusades and the Inquisition, people committed terrible deeds in the name of Christ. In our home country, slavery and Jim Crow all too often was justified in the name of Christ.”

The irony is this: President Obama is a Christian, and this is him offering an apology, as a Christian, for the things that we who are Christians have done in the past.

Those who are demanding an apology from the president are, it seems to me, simply showing that they are unrepentant for the sins that Christians have committed in the past. And as if this sinful attitude of theirs were not enough, they not only fail to apologize for past sins, but demand an apology from a Christian who does apologize!

The way they have worded their complaints indicates that they think President Obama is not a Christian. And yet their unrepentant attitude suggests that, if anyone isn’t Christian, it is them.

In related news, a Facebook friend sarcastically shared the latest attack on Christianity by the president: the White House will be hosting a Gospel music concert. See also Bruce Gerencser’s post on how he, as an atheist, sees the conservative view of Obama and his faith.

April 11, 2015 He Threw It
Recent Comments
10 Comments | Leave a Comment
"Intriguingly enough, since you mentioned "No one has suggested that Jesus was merely a carbon ..."
Chris H #JohnTheBaptist Enoch Seminar Nangeroni Meeting Day ..."
"Bestest post,..... My daughter who is incapable of being on the internet due to genetics ..."
davidt Evil In the Youth Group
"From my perspective this comes from a really problematic tendency in neo-liberal thinking to promote ..."
Chris H Jesus Wasn’t Unique
"It definitely seems memeworthy to me!https://uploads.disquscdn.c..."
James F. McGrath Evangelicals, Objective Truth, and the MSM
Browse Our Archives
get the latest from
Religion Prof: The Blog of James F. McGrath
Sign up for our newsletter
POPULAR AT PATHEOS Progressive Christian
1