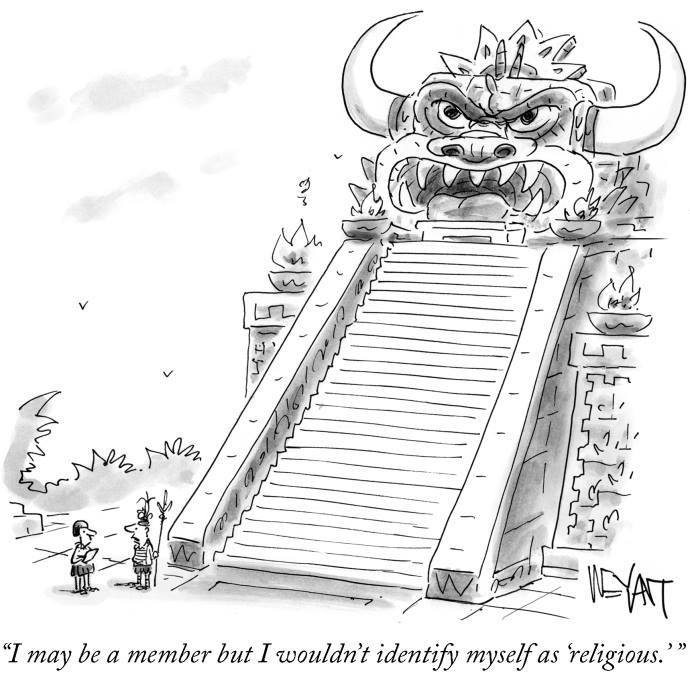 This New Yorker cartoon is a great response to the discussions of the recently-published Pew survey data which everyone is talking about. Surveys are interesting, but often we have seen surveys about an election (for instance) suggest one thing, only for the actual result to be very different.

It seems incredibly unlikely that roughly one tenth of the people who were Christians seven years ago have lost their faith altogether, doesn’t it? And so what is the best way to interpret the change that the Pew survey traces? Is is that people who a decade ago would have given a default answer based on habit or heritage now no longer do so? Or have that many people genuinely changed the way they think about themselves and their beliefs and practices in a more radical way?

The cartoon can also be useful in highlighting the way people tend to generalize in their perception of other religions. They may know that, in their own tradition (e.g. Christianity), there are some people who are devout in the extreme and some people who keep the label but little else. That is true in all religious traditions, and it is important to be reminded of that fact, lest we be tempted to engage in stereotyping and inaccurate generalizations.

It might be interested to know how readers of this blog (1) identify themselves, and (2) rate their religiosity/spirituality, and (3) whether that correlates with membership in a religious institution (including one that you may no longer attend but in which you are still on the membership list). Does this little community provide support for or counterevidence against what the Pew survey suggests?

Let me conclude, since it connects with both the Pew survey and the temple in the cartoon, by sharing Morgan Guyton’s recent post, “What if churches were temples instead of programs?”

May 15, 2015
The Very Condition of Humanity is to be Wrong about God
Next Post

May 16, 2015 Politicized Christianity's Pact With The Devil
Recent Comments
20 Comments | Leave a Comment
Browse Our Archives
get the latest from
Religion Prof: The Blog of James F. McGrath
Sign up for our newsletter
POPULAR AT PATHEOS Progressive Christian
1