Politicized Christianity’s Pact With The Devil

Politicized Christianity’s Pact With The Devil May 16, 2015 James F. McGrath 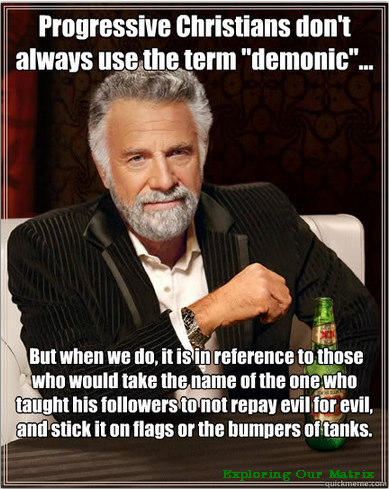 Having recently shared some thoughts on the separation of church and state, and the politicization of religion, in relation to the Pew survey data that was published recently, I thought I would also re-share the meme above, which I made a few years ago, and shared in a post called “Possibly the Most Interesting Pact with the Devil.” There I wrote:

[I]f anything has been to the detriment of Christianity in the past two millennia of its history, it is the forging of an allegiance between imperial/state power, and the church.

I don’t think there is a literal personal entity called “Satan.” But if I did, I’d expect him to be seeking to put the church in bed with the state, and not keep them apart in the manner that has upheld and defined religious freedom in the United States.

Progressive Christians don’t always use the term “demonic” – certainly not as much as some Christians do. But when we do, it is in reference to those who would take the name of the one who taught his followers to not repay evil for evil, and stick it on flags or the bumpers of tanks.

May 16, 2015 Bibliogians and Bibliology
Recent Comments
39 Comments | Leave a Comment
Browse Our Archives
get the latest from
Religion Prof: The Blog of James F. McGrath
Sign up for our newsletter
POPULAR AT PATHEOS Progressive Christian
1