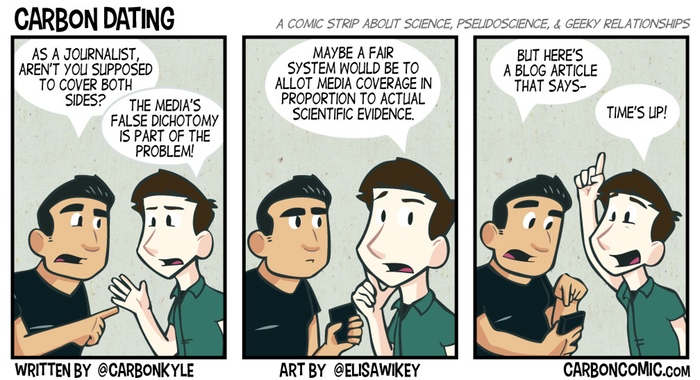 Hemant Mehta shared the above as well information about a Kickstarter campain for the comic strip series it is from.

Some years ago I explored a different approach to “proportional time” for evolution and young-earth creationism.

I would point out, however, that not all religion is committed to the false “teach both sides” dichotomy. Unfortunately, on the other hand, some atheists are just as committed to the false dichotomy as their religious fundamentalist counterparts, being concerned to dismiss religion as nonsense precisely because they share the religious fundamentalists’ assumption that religion offers competing explanations for what science studies.

May 13, 2015 Self-Defeating Religion
Recent Comments
5 Comments | Leave a Comment
Browse Our Archives
get the latest from
Religion Prof: The Blog of James F. McGrath
Sign up for our newsletter
Books by This Author Books by James F. McGrath

The Past, Present, and Future of Christianity in...
My previous post shared the introduction to this public lecture. The first...
view all Progressive Christian blogs
What Are Your Thoughts?leave a comment
Copyright 2008-2021, Patheos. All rights reserved.
error: Content is protected !!