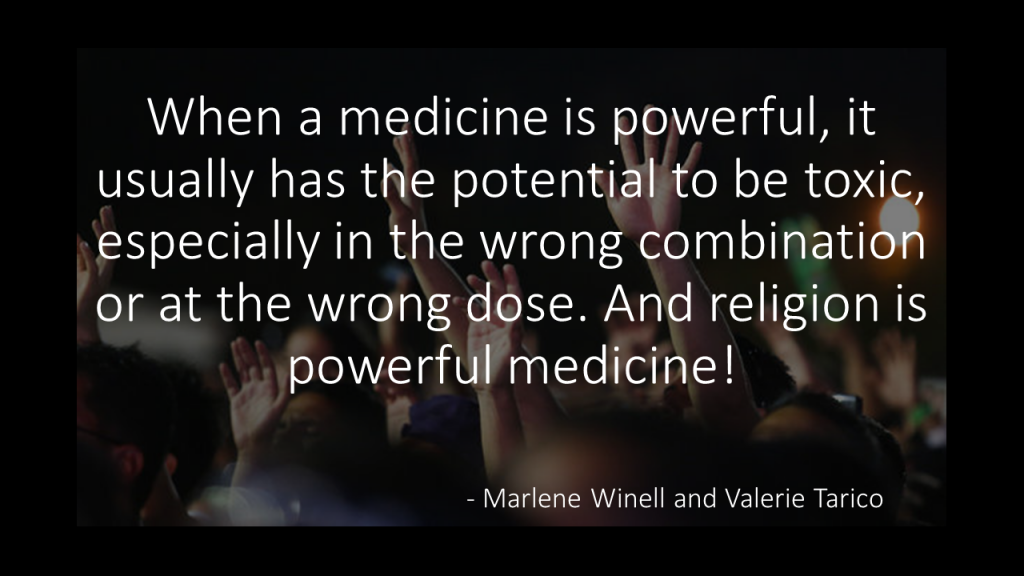 The purveyors of religion insist that their product is so powerful it can transform a life, but somehow, magically, it has no risks. In reality, when a medicine is powerful, it usually has the potential to be toxic, especially in the wrong combination or at the wrong dose. And religion is powerful medicine!

– Marlene Winell and Valerie Tarico, in an article in Alternet.

I appreciate the fact that Winell and Tarico – critics of religion in general – recognize in the title of their article that not all forms of religion, nor even all forms of Christianity, create such effects.

I can remember in my teens, as a recent convert to Pentecostalism, that I sought to maintain spiritual highs in ways that made for mood swings; that I spent time worrying about which way God wanted me to ride my bike to school, and committing the unforgivable sin, and the Rapture. My born-again experience was life-transforming. But so too was moving beyond the kind of approach to religion that I adopted immediately thereafter, and finding instead a less dogmatic, less obsessive, less neurotic approach to Christianity.

Winell and Tarico refer often in the article to this movement as “Bible-believing” and the like. Yet that whole introspective and individualistic approach to faith is not actually found in the Bible. It is a modern phenomenon.

What are your stories of the positive and negative impact that religion – or the lack thereof – has had in your life?

May 10, 2015 Critic of the Domination System
Recent Comments
87 Comments | Leave a Comment
Browse Our Archives
Follow Us!