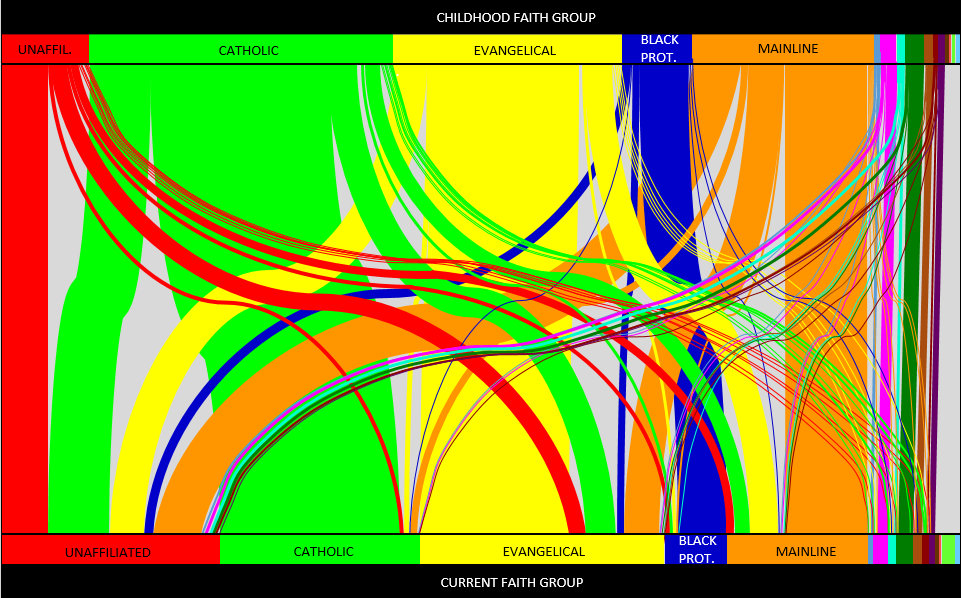 Mike Bell created the above image, displaying the movement of individuals either remaining within or changing out of their religious communities. The data derives from the Pew surveys.

I think this is striking in ways that reading the numbers, or graphing them in other ways, has not been. The fact that greater numbers have moved from the mainline to unaffiliated than the reverse, while it has been something close to a fair exchange between evangelicals and the mainline, are among the things that really jumped out at me. The number of the unaffiliated who become affiliated was also more striking in this depiction than it ever was looking at the numbers alone.

What strikes you about this representation of the data?

Click through for further details about the colors on the right representing small groups, his 2007 graph of the same sort, and his plans to offer additional commentary.

May 23, 2015 Temper Your Criticism With Kindness
Recent Comments
13 Comments | Leave a Comment
Browse Our Archives
Follow Us!

Faith in a Time of Pandemic - The...
LXVIII The Absent God (6/3) Why do you hide yourself in times...
view all Progressive Christian blogs
What Are Your Thoughts?leave a comment
Copyright 2008-2020, Patheos. All rights reserved.