Now there were devout Jews from every nation under heaven living in Jerusalem. And at this sound the crowd gathered and was bewildered, because each one heard them speaking in the native language of each. Amazed and astonished, they asked, “Are not all these who are speaking Galileans? And how is it that we hear each of us, in our own native language? Parthians, Medes, Elamites, and residents of Mesopotamia, Judea and Cappadocia, Pontus and Asia, Phrygia and Pamphylia, Egypt and parts of Libya belonging to Cyrene, and visitors from Rome, both Jews and proselytes, Cretans and Arabs — in our own languages we hear them speaking about God’s deeds of power.” All were amazed and perplexed saying to one another, “What does this mean?” But others sneered and said, “They are filled with new wine.”

Clara, seeing this, asked the Doctor, “Did you really not realize the effect the TARDIS translation circuit would have if you arrived in Jerusalem on a feast day, with all these visitors from other countries?”

The Doctor shrugged and said, “I’ve always been curious about the history of Christianity, and every single time I’ve managed to get myself entangled in the events. Did I ever tell you about about the time I saved Jesus from a killer robot from the future?”

The Doctor entered the TARDIS as he said these last words. “You’re making that up,” Clara replied, following him inside.

The TARDIS dematerialized not long after Peter finished his sermon. 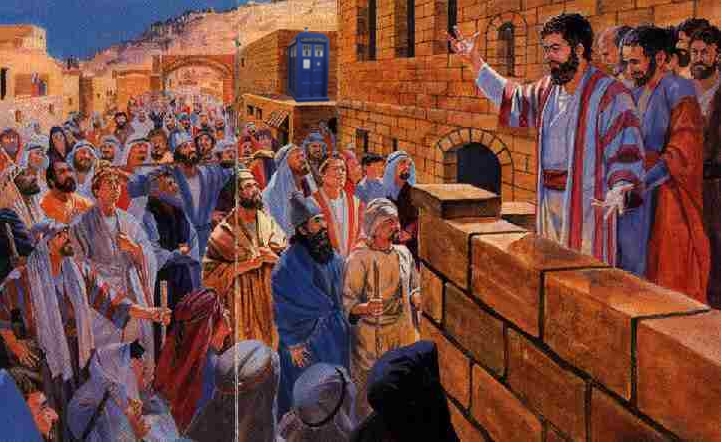 The “Pentecost Effect” is a regular feature in science fiction – the TARDIS translation circuit, the universal translator, the Babel fish, and so on. And so on the day of Pentecost, when a skeptically-minded Christian may not know what to make of the story in Acts 2, other than that it is symbolic of the undoing of the confusion of languages and the Gospel spreading to all people, it seems appropriate to celebrate this element of science fiction.

Did you spot the TARDIS in the picture above?