Would Discovering Extraterrestrial Life Make us – and them – Platonists, Mormons, or Atheists?

Would Discovering Extraterrestrial Life Make us – and them – Platonists, Mormons, or Atheists? May 16, 2015 James F. McGrath

The Week featured an article a while back which suggested that the discovery of alien life would turn us all into atheists or Mormons. Matthew Ferguson recently mentioned a number of issues which would, at the very least, raise issues for traditional Christian theology.

In an article which quoted me (even if it gets my name and role wrong), Gizmodo explored similar issues related to the development of artificial intelligence. That article also focused on the work of Christopher Benek, whom I mentioned recently, and who has explored the intersection of Christianity and robots in interesting ways.

According to IO9, NASA seems to be cranking its search for extraterrestrial life into high gear. And so these subjects may not be merely theoretical forever.

Which religious traditions do you think will flourish or struggle in response to the discovery of extraterrestrial life?

See also yesterday’s post “Jesus: Out Of This World.” 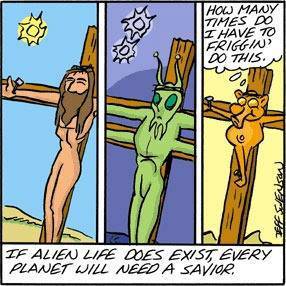 May 17, 2015 The Batsignal and the Cross
Recent Comments
24 Comments | Leave a Comment
"To be critical you have to know how the money is used. A lot of ..."
Euro Man If Religion Were The Key To ..."
"The level of insensitivity to gossip and rumors and slander in the Evangelical churches and ..."
Euro Man Christians and Internet Rumors
"VinnyJH: "I think that it's an argument [against?] Jesus being the kind of teacher who ..."
robrecht Was Paul Uninterested in the Historical ..."
"I would personally say my probability that Jesus existed is between 80-90%. I give at ..."
Chris H Was Paul Uninterested in the Historical ..."
Browse Our Archives
get the latest from
Religion Prof: The Blog of James F. McGrath
Sign up for our newsletter
POPULAR AT PATHEOS Progressive Christian
1