Privilege in the Corinthian Church

We discussed 1 Corinthians 11 in my Sunday school class recently. I shared the well-known details that churches met in homes, and the argument that what is in the background to this passage was the custom of people sitting (or rather reclining) at meals to be separated along socioeconomic lines.

The interesting suggestion was put forward that, in addition to such things, the very timing of the meal might have been an issue. The wealthy host and his or her friends might have the luxury to meet at a particular time for a meal, while ordinary people might still have been working. And so, by the time the latter arrived, the former might well have already made significant progress in eating the food and drinking the wine that was available.

That suggestion fits wording in the text quite well. And it makes the text relevant to an important topic in our time: unexamined and unrecognized privilege.

Has anyone else made or come across this suggestion before, that the timing of the meal might have led to a separation between the wealthy and the poor in the Christian gatherings in Corinth? 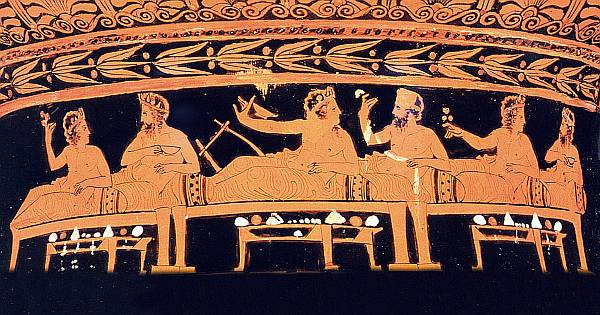 June 21, 2015 Judas!
Recent Comments
10 Comments | Leave a Comment
"These fake dinosaurs are a lot more authentic to the real ones than the Creation ..."
Jennifer A. Nolan Prehistoric Planet
"I'm happy to say my Secular Frontier blog post of my interview with Edouard looks ..."
John MacDonald The Odious Penal Substitutionary Theory of ..."
"The name of the song was mentioned in the episode here is the full version ..."
dschram Entering Strange New Worlds of Star ..."
"Thank you for sharing this. Where did you learn that about the Kenyan folk song? ..."
James F. McGrath Entering Strange New Worlds of Star ..."
Browse Our Archives
Related posts from Religion Prof: The Blog of James F. McGrath