Are Sacred Texts All The Same? 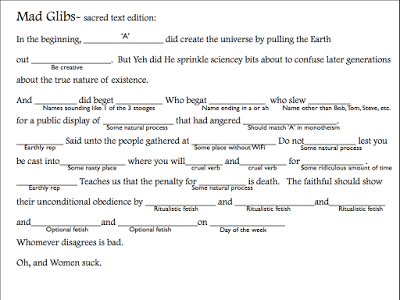 This image from Pliny the In-Between is an attempt at humor, but raises an important question. Are all sacred texts the same, with the only differences being the sort that Mad Libs are famous for, but with a common structure beneath it all? My inclination is to say no. Even within the Bible, one will find different literature not merely filling in the blanks in different ways, but adopting an altogether different approach.

On the other hand, as I reflect on the comparison between the Bible and the TARDIS made on the Progressive Redneck Preacher blog, it seems to me that what it says specifically about Scriptures can be applied to the root meaning of “scriptures” in the broader sense of all writings/literature:

This is a part of the miracle of Scripture.   When we meditate on it in an open way, we open ourselves up to the experiences of other people of God throughout time and space.   It is like a Tardis we enter into, which every Doctor Who fan knows, ushers you into other times and places, because its words reflect the experiences of God by people in all kinds of situations.

On the other other hand, consider the satirical bit of “news” from The Onion about a non-denominational terror organization. The fact that there does not seem to be such a thing in reality strikes me as significant. There are forces of division and hate, and forces of love and reconciliation. And despite the attempts that are sometimes made to paint all religion – or all religions other than one’s own – with one broad brush, there are commonalities and distinctives that run through all sacred texts, just as they do through all other human products. But they are not all the same, nor do they all warn of the same things or emphasize the same things. But to the extent that they do, it is because they reflect commonalities of concern in the realm of human life and experience.