I’m happy to be able to participate in the Patheos Book Club about Timothy Dailey’s book, The Paranormal Conspiracy: The Truth about Ghosts, Aliens and Mysterious Beings

A quote on the front cover describes the book as a mix between Mythbusters and Frank Peretti. In reading the book, I saw plenty of the latter, but nothing whatsoever of the former.

The book surveys a range of unusual phenomena old and new, from purported reincarnations to UFOs to the Cicada 3301 cryptography puzzle.

Dailey’s view is that all of these things are the work of demons, and that this is how to best explain the apparent reality of the phenomena, combined with evidence of unreality and the frustrating lack of clear evidence.

From my perspective, Dailey isn’t being nearly skeptical enough. But I think it is easy to see why. If alien abductions and lost cities and spiritualism can be merely human deceptions, or perhaps genuinely sincere human beliefs which involve self-deception, then that would leave the purported supernatural elements and experiences in Dailey’s own religious tradition open to the same criticisms and challenges.

And so the book is an expression of the conservative Christian desire for certainty and for matters to be clear-cut, black and white.

And so I can certainly recommend reflecting on the kinds of purported phenomena that Dailey surveys in his book. But I cannot recommend responding to those phenomena in the way Dailey does. Other than the purported combination of evidence of reality and lack of evidence, the existence of demons and their involvement in these phenomena is not something that Dailey demonstrates, but merely something that he assumes. And there is no need to read an approximately 200-page book in order to learn that someone asserts that these things have a demonic origin. 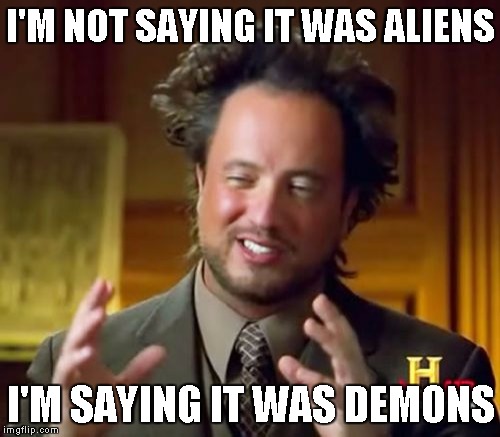 July 31, 2015 What Really Happened To The Dinosaurs
Recent Comments
9 Comments | Leave a Comment
"Li Hsen Chang only speakee in pidgin around people who expect him to. At all ..."
John Knowles Doctor Who: The Talons of Weng ..."
"What does the link to your blog have to do with this blog post?"
James F. McGrath The Most Extraordinary and Implausible Inventions ..."
"Probably the foundational truths that need to be taught is rightly dividing the Word of ..."
David Tiffany The Most Extraordinary and Implausible Inventions ..."
"Derp now anyone who advocates a 2 state solution is a Zionist like Chomsky.Meanwhile Israel ..."
Bones Academics and the Israel-Palestine Conflict
Browse Our Archives
get the latest from
Religion Prof: The Blog of James F. McGrath
Sign up for our newsletter
POPULAR AT PATHEOS Progressive Christian
1