The Prophets of Our Time

We had an interesting discussion of prophecy in my Sunday school class recently, as we continued working our way through 1 Corinthians.

I’ve often heard people suggest that preachers are the closest equivalent today to ancient Israel’s prophets. I’ve often viewed that as a problematic stance, since it seems designed to add to the authority of modern preachers, while also ignoring the fact that few such figures today preface their words with “thus says the LORD.”

But if one reverses the direction of comparison, I think it may actually work – especially if one combines it with Abraham Heschel’s suggestion that prophets are those who believe that God feels about things the way they do – that their horror at injustice, or religious practices, is what God feels about those things.

Preachers today, whether saying that God will destroy America for legalizing same-sex marriage, or that God is proud of us, seem to be similar, even if they may not think in those terms. Their stance is that they feel revulsion or pride at what our nation has been doing, and are persuaded that God feels the same.

Perhaps ancient Israel’s prophets and today’s preachers aren’t that different after all. And in both cases, it is easier to declare who was right with the benefit of hindsight.

See also Richard Beck’s thoughts on the necessity that prophetic voices address the spiritual and not only the political aspects of injustice.

Let me end with this image from Evolving Perspectives. It highlights something that I have commented on before: those who predict divine judgment predict things that happen anyway, not things that never happen in a particular area. That too is worth pondering. Gideon doesn’t ask for words across the sky as a sign. He asks for something to happen to dew. Just like waters are unleashed in the flood, rather than God simply making the wicked vanish. God was thought of as involved in what we call weather and other natural processes. And so even those who claim to believe in the God of the Bible today, do not believe and think about God in the way their ancient forebears did. And that itself deserves to be a topic of reflection. 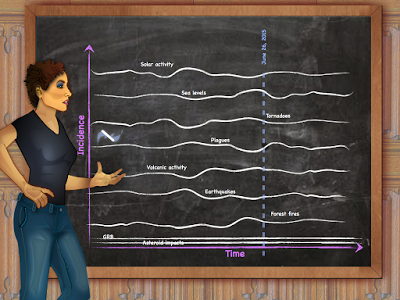 July 9, 2015 When Churches Make People Need Therapy (or Why Anti-Gay Christianity is an Abomination)
Recent Comments
13 Comments | Leave a Comment
Browse Our Archives
get the latest from
Religion Prof: The Blog of James F. McGrath
Sign up for our newsletter
POPULAR AT PATHEOS Progressive Christian
1