I’ve been rewatching the James Bond movies with my son, who hadn’t seen them yet. We just watched On Her Majesty’s Secret Service

, and are Whovians, and so it is time to mention the “James Bond is a Time Lord” theory. I’ll include a summary of it below. But even more fun, I think, is to try to figure out which Doctor is like which Bond. For instance, perhaps Daniel Craig corresponds to Christopher Eccleston, as they are both the leather jacket wearing versions of their character, and both reboot their respective franchise. And Sean Connery might correspond to David Tennant – the latter is both the eleventh and twelfth Doctors, and the former is the first and third Bond. 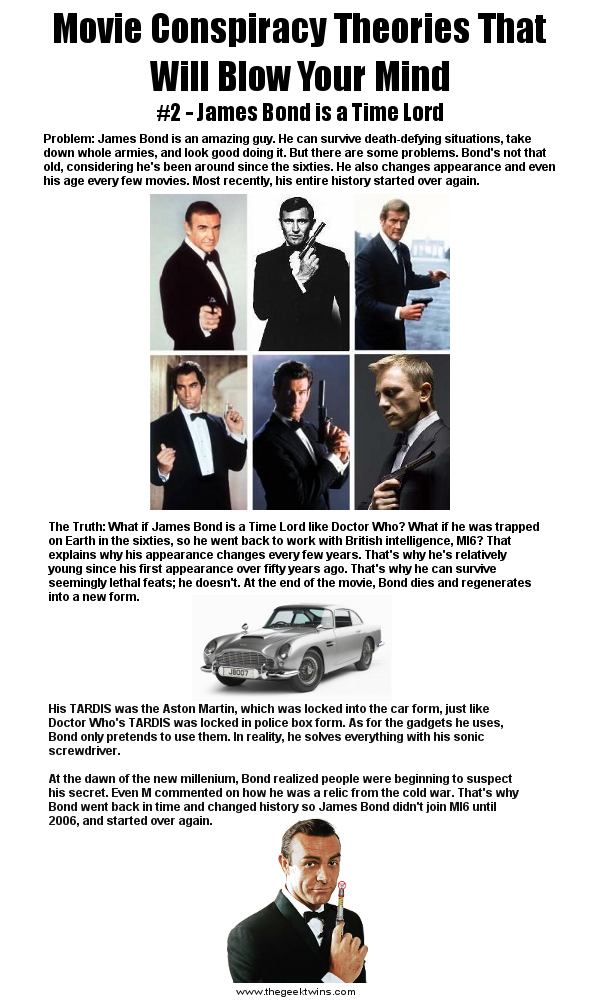 September 8, 2015 Doctor Who: The Invisible Enemy
Recent Comments
14 Comments | Leave a Comment
"I understand that you missed my point, but you seem even now to be fixated ..."
James F. McGrath The Aims and Ending of Luke-Acts
"But my point is that you seem to include those you listed including Matthew, Papias, ..."
Realist1234 The Aims and Ending of Luke-Acts
"nice hymns."
Brandon Roberts More Bible and Music
"Robert Mueller's report specifically states that Russia interfered in the 2016 election and that Mueller's ..."
Ocelot Aardvark Duel of the Antichrists
Browse Our Archives
get the latest from
Religion Prof: The Blog of James F. McGrath
Sign up for our newsletter
POPULAR AT PATHEOS Progressive Christian
1