Doctor Who: The Invisible Enemy

is famous as the episode that introduced K-9. But what I find most interesting about it is its exploration of racism and specieism.

The Doctor and Leela arrive in the year 5,000, at a point at which humanity has been expanding through the solar system. The Doctor explicitly makes a comparison between humanity and a spreading disease, and when Leela is taken aback, he says “Some of my best friends are human.” I can only assume that this is a deliberate echo of the defense that racists often try to use.

A life form known as the Nucleus is then introduced, which takes over human hosts, and eventually the Doctor. Doctor Who then does the Fantastic Voyage thing as the Doctor and Leela are cloned, shrunk, and inserted inside the Doctor’s infected body, where his cloned self can comment on the superiority of his brain, as well as work to find and try to defeat the Nucleus.

The way the Nucleus articulates its point of view is fascinating in light of the themes that open the episode. It insists that as a life form it has every right to exist and to reproduce. Here is the relevant bit of dialogue:

DOCTOR 2: Who are you? NUCLEUS: I am the Nucleus. DOCTOR 2: You’re trespassing, you know. Treading on my unconscious, affecting my metabolism. Nucleus of what? NUCLEUS: The Nucleus of the Swarm. DOCTOR 2: Oh. Oh, I see. Why did you choose my brain? NUCLEUS: Because of your intelligence. DOCTOR 2: Oh, well, I can understand that, but do you realise you have no right NUCLEUS: I have every right! It is the right of every creature across the universe to survive, multiply and perpetuate its species. How else does the predator exist? We are all predators, Doctor. We kill, we devour, to live. Survival is all, you agree? DOCTOR 2: Oh yes, I do, I do. And on your argument, I have a perfect right to dispose of you. NUCLEUS: Of course. The law is survival of the fittest. DOCTOR 2: Touché. NUCLEUS: Your time is running short. How do you intend to dispose of me? You have no weapons, and in minutes you will cease to exist. I am the virus of the Nucleus of the Swarm. For millennia we have hung dormant in space waiting for the right carriers to come along. DOCTOR 2: Carriers? What do you mean, carriers? I’m not a porter. NUCLEUS: Consider the human species. They send hordes of settlers across space to breed, multiply, conquer and dominate. We have as much right to conquer you as you have to strike out across the stars. DOCTOR 2: But you intend to dominate both worlds, the micro and the macrocosm.

Doctor Who shows itself to be more self-aware than much sci-fi, which never asks why humans have the right to spread but are assumed to be automatically in the right even when interfering with the spread of other species. The Doctor and Leela have this conversation slightly later:

LEELA: I thought you didn’t like killing? DOCTOR: I don’t. LEELA: Then why are you doing all this? DOCTOR: The virus has a perfect right to exist as a virus, not as a giant storm threatening the entire Solar System. Everything has its place. Otherwise the delicate balance of the whole cosmos is destroyed. LEELA: I still say we should blow it up.

In the end, Leela’s blunt approach ends up being the one that solves the problem.

The futuristic spellings we see written in places – such as “isolayshun” and “airlok” – are a cool feature showing attention to detail, and awareness that language evolves.

At the end of the episode, Dr. Marius asks the Doctor to take K-9.

If you have seen this episode, what did you think of its exploration of parallels between humans and other life forms, and the suggestion that there is a place for, and a balance that needs to be maintained between, us all? Does it seem to you better than the notion of humanity having a “manifest destiny” to spread through and take over the galaxy, which we see in so much other science fiction? 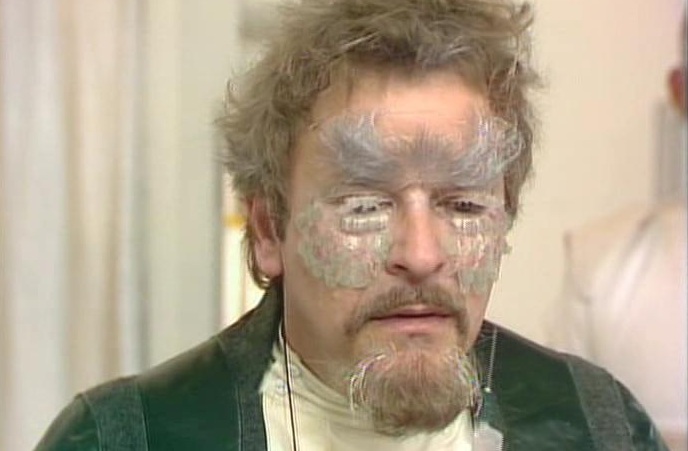 September 8, 2015 When You Have More Than You Need
Recent Comments
0 | Leave a Comment
Browse Our Archives
Related posts from Religion Prof: The Blog of James F. McGrath