How Widespread is Mythicism?

An English conservative Christian website drew on Barna research and put together a study, which includes the statistic that about one in five people without a church background in England think Jesus was a myth, and roughly the same number are uncertain whether there was a historical Jesus.

Conservative Christians are concerned for different reasons that secular historians will be, and are just as concerned that people don’t think Jesus was God as that they don’t think he existed. But for scholars and historians of all stripes, this data will be worrying because it shows how widely misinformation spreads and is accepted. It makes me think of the satirical article from a few months ago, reporting that Earth is threatened by the development of a new strain of fact-resistant humans. 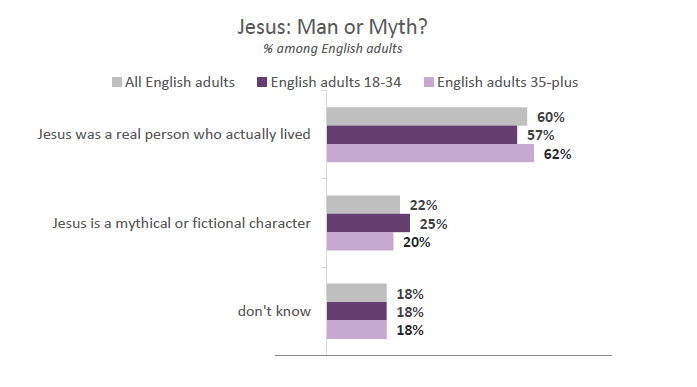 September 29, 2015 #YCAS2015 and Gospel Authorship Around the Blogosphere
Recent Comments
205 Comments | Leave a Comment
Browse Our Archives
get the latest from
Religion Prof: The Blog of James F. McGrath
Sign up for our newsletter
POPULAR AT PATHEOS Progressive Christian
1