#YCAS2015 and Gospel Authorship Around the Blogosphere

I’m not the only blogger who was at the York Christian Apocrypha Symposium, by any means. I am glad to see that Eric Vanden Eykel was inspired to revive his blog, and has posted a recap of the conference. Timo Paananen has also posted a recap of day 1. There was also a very strange post on G. W. Schwendner’s blog which was trying to interact with the Gospel of Jesus’ Wife session through online blog summaries, and which got both the names of scholars and the details of what was presented wrong. The post is gone now, and so I really don’t know what to make of that strange incident!

A major focus at the conference was pseudepigraphy and forgery. And so I will share here, of related interest, Keith Reich’s two recent blog posts, questioning the assumption that the Gospels were originally anonymous. If titles can be found in our earliest manuscripts of a work, is it in any sense accurate to say that work is anonymous? We might still want to make the case that the work is misattributed, or pseudepigraphal. Indeed, the way of referring to the four canonical Gospels – and others – as “the Gospel according to X” seems to suggest that the titles were added by someone other than the authors, to distinguish multiple works in the same category. But if this happened early enough that the authors’ names were known, then it is still questionable whether “anonymous” is the right category. 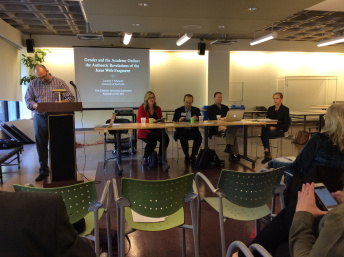