Misattributed Sayings and the Historical Jesus

I’ve blogged in the past about sayings which were attributed to various figures – Mother Teresa and Reinhold Niebuhr – while others have addressed Albert Einstein and Josh Groban.

One thought that struck me is that we tend to have saying gravitate from less famous people to more famous ones, and new sayings fabricated and attributed to famous individuals. I found myself wondering whether we ever have sayings misattributed to non-historical figures. And if not, does that have any bearing on the historicity of Jesus?

The Ink Paper Pen blog has some other examples of sayings which were originally anonymous or by someone who is not famous, and were subsequently attributed to famous people. And Chris Porter has been trying to track down the source of a quote attributed to John Calvin. 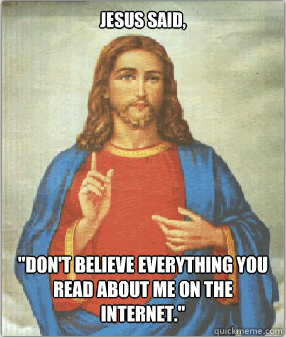 Evangelicals, I've Got Some Questions For...
All Set Free
Books by This Author Books by James F. McGrath