The Bible is Clear: You Must Not Distort Justice 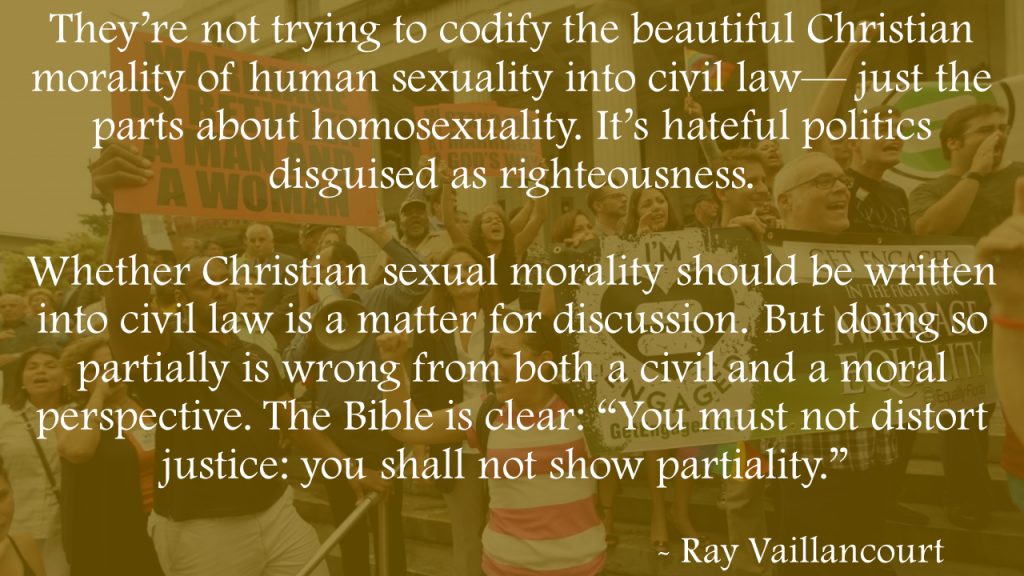 Loren Rosson has an absolutely fantastic guest post by his friend Ray Vaillancourt, offering a truly Biblical approach to a contemporary issue. Here is an excerpt:

Conservatives remind us that the Bible is clear: homosexual behavior is a sin. We have a moral duty to stop it. God wants us to teach homosexuals some Bible values.

Some folks protest, though. It’s discrimination. We’re not supposed to judge. We’re supposed to love and accept people.

Who are we to believe? Well, if we say we believe in Jesus, then let’s look to Jesus. What would he say about the Christian campaign against homosexuality and gay marriage? To help understand how Jesus might respond, let’s look at a case of sexual sin brought before him.

Then the scribes and the Pharisees brought a woman who had been caught in adultery and made her stand in the middle. They said to Jesus, “Teacher, this woman was caught in the very act of committing adultery. Now in the law, Moses commanded us to stone such women. So what do you say?” (John 8:3-5)

The scribes and Pharisees are technically correct in their application of the law to this woman caught in adultery. The Law proscribes death for adultery. But their justice is partial, by both meanings of the word “partial.” It is partial (incomplete) because the Law (Deuteronomy 22:22) calls for death for both the man and the woman, and they’re only charging the woman; and it is partial (discriminatory) because they are clearly using part of the law as an instrument of oppression against those they hate. It’s hateful politics disguised as righteousness.

This is the problem with many Christians trying to use the political process to defend marriage from homosexuality. While technically correct in isolation, the effort is partial— incomplete and discriminatory. It’s only about homosexuality. Conservative Catholics like to quote the terms “intrinsically disordered” or “objectively disordered” from the Catechism (#2357,2358) to show just how terrible homosexuality is. But I wonder how many can name the sexual sins that go with these labels:

Click through to read the rest. Of related interest, Bob Cornwall shared a video of David Gushee speaking about ending the church’s contempt towards sexual minorities, and Ben Dixon explains why Kim Davis is Pharaoh and not Moses, Nebuchadnezzar and not Daniel and his friends.

3 Lies Christians Believe
For the longest time I believed these 3 lies. The Gospel is...
view all Progressive Christian blogs
What Are Your Thoughts?leave a comment
Copyright 2008-2020, Patheos. All rights reserved.