Brent Landau got the day started by highlighting the Gospel of Jesus' Wife, and whether it is still worth talking about even if it is a forgery. An important question running through the symposium is whether our interest in ancient apocrypha as academics ought to be different from our interest (or lack thereof) when it comes to more recent compositions. Are the same range of motives found for making such works throughout history?

The first panelist in the first session was Stanley Porter, whose talk began by looking back across the discovery and study of extracanonical Gospels and other similar literature. Their publication, and the need for critical editions, was highlighted, especially the way approaches to editing and publishing such works has changed. How the field of papyrology was invented, emerging from the study of Classics in an era of discovery, is interesting. Too often we work in a field but are not fully aware of the history of that field, how it got started, and how such events have shaped the field up to the present. Porter also highlighted what the Christian apocrypha can tell us about the literacy, creativity, theology, and other aspects of Christianity at a variety of points in its history. He also highlighted things that still require our attention: What exactly constitutes an apocryphal Gospel? Are temporal parameters relevant? Content? What function did these texts serve? We don't really know, especially in the case of fragmentary texts. Finding more of them could obviously help fill in the picture. Also, there is little agreement about the role of such texts in the study of the New Testament, e.g. in textual criticism. After the paper, Bart Ehrman asked what Porter thought of Andrew Bernhard's volume. Porter emphasized the need for visual examination of the physical manuscripts, that there are things one does not get from digital facsimiles alone. Porter offered an anecdote about a tiny fragment which has the nomen sacrum for Peter written in red ink while the surrounding text is black. Porter said that even editions which do not include this can be valuable, and that Bernhard's volume is better than most since it includes examination of at least some of the manuscripts of texts in the anthology. Porter's point is that we need critical editions which include direct examination of manuscripts as well, for all texts. Porter and his wife have made reading and diplomatic editions of New Testament manuscript in which they tried to present other aspects of the manuscript, e.g. annotation added to guide reading or intoning. Such details can tell us about how they were used. What does it indicate when some pericopes have ekphonetic notation and others do not? Ostraca and amulets as well as fragments of known and unknown Gospels can be relevant to text criticism, as well as being interesting for other reasons. Also noteworthy is that comparison of NT and apocryphal texts suggested that the former were relatively stable.

Ross Ponder from the the University of Texas in Austin spoke about P. Oxy. 5072, which was published just 4 years ago in volume 76 of the Oxyrhynchus Papyri. The fragment is from the middle of a page and so we cannot tell the size of the text from which it derives, nor for certain which is the recto and verso. This is the most recently published apocryphal Gospel. Ponder made reference to discussion of a rare word in the text on blogs, contrasting it with more scholarly discussion elsewhere. He discussed points of disagreement with Chapa's work. The text has a version of the Gerasene demoniac story, and sayings attributed to Jesus. Ponder points to P77 (P. Oxy. 2683, 4405) as containing paragraphos markers similar to 5072, as does P64 (Magdalene Papyrus), P. Oxy. 654 (Gospel of Thomas sayings 1-7), and P127 (P. Oxy. 4968). The last papyrus switches between use of a dot and a diagonal line for this purpose. All thse texts should be studied as part of our investigation of the reception history of the New Testament. Here too (in the question time as well as briefly in the paper itself) the shortcomings of earlier editions, which do not always indicate features of the manuscript other than the letters of the text, were highlighted. Questions asked whether the fragment could be apotropaic or from a Gospel harmony. Ponder said that everyone thinks the text is interesting, but no one has been working on it. Brent Landau suggested that unique verbal forms in the text might count against that. Bart Ehrman responded by referring to the Diatessaron and the fluidity of the early manuscipt tradition. Tony Burke asked about the delineation between New Testament variant manuscripts, and texts which ought to be considered distinct works. Amulets are also an interesting and controversial case related to this. Ponder did interesting work in attempting to reconstruct the text, based on both visible letters and ink traces at the edges, and Pierluigi Piovanelli both complimented his work and made an interesting suggestion for what the overall point of the passage might have been.

Now it is time for a break. What a great first session! 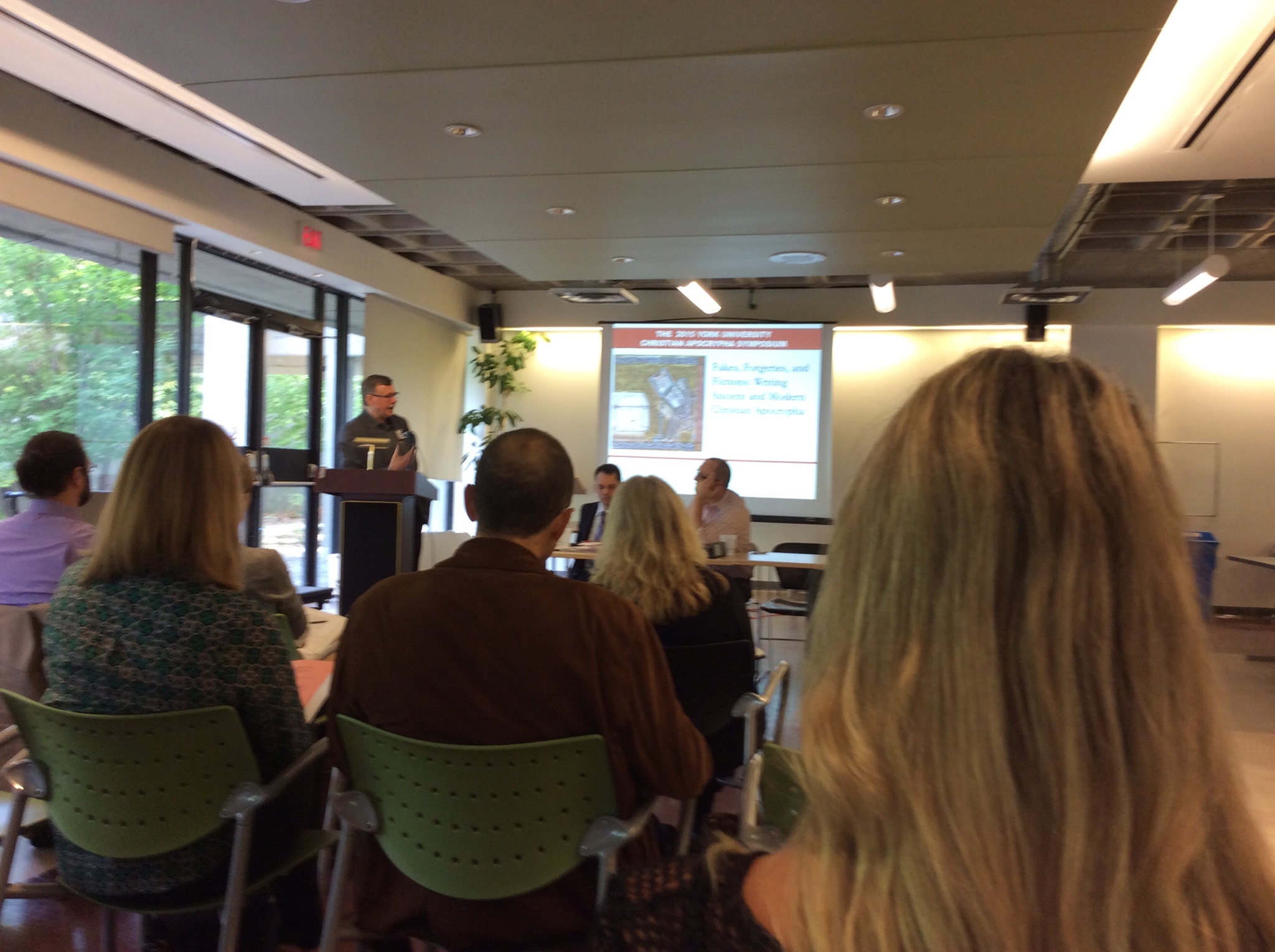 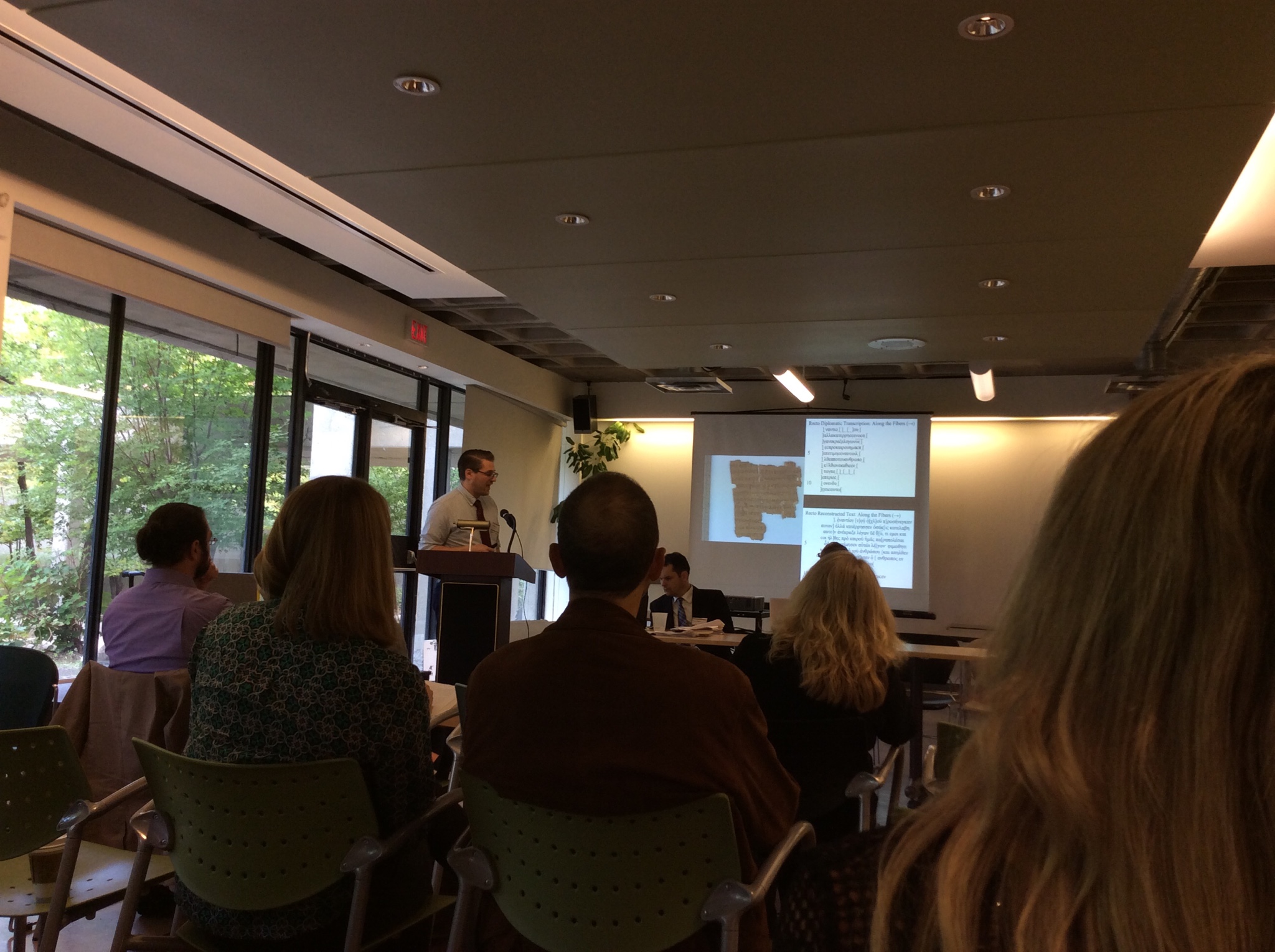