After the coffee break, Dominique Côté spoke about the Pseudo-Clementine literature, and the question of why it presents itself as a letter which needs to be approved by James of Jerusalem. James is depicted not only as bishop, but bishop of bishops, and the transmitter of the esoteric truth. Despite the marked difference of content in the teachings, it is striking how similar the approach to safeguarding the truth is across developing orthodoxy, Jewish Christianity, and Gnosticism. Côté suggests that, in depicting James as descendant of David and high priest, Epiphanius was trying to “recycle” James for Gentile Christianity. The way he and Eusebius utilize James provides important contextual information for the Pseudo-Clementines. For Jewish Christians, James embodied the harmony of Christian identity and observance of the Law. Côté asked why Rufinus translated the Recognitions but not the Homilies, and suggests it was because it allowed emphasis on the primacy of Rome, elevating Peter by way of James and stressing the continuity between Jesus, Paul, and ultimately Peter in Rome. The debates between Jerome and Rufinus about Origenism touched on Jewish influences on Origen. In the question time, the comparison between James and Moses in Ep. Petri was brought up. In the Pseudo-Clementines, James is just there in the background to lend his authority, while Peter is the actual focus in most of the story, who does most of the work. But the story of Moses appointing successors might be relevant to the matter of apostolic succession. In Josephus, James is a martyr, while in the Pseudo-Clementines he is attacked – by Paul! – but recovers.

The last presentation of the morning was by Anne Moore, and focused on female friendships and rivalries in Christian apocrypha. She began by noting how certain episodes in the apocryphal acts resemble soap operas. Soap operas were once thought of as being for women and emerging out of women’s experience. Academic study suggested that the appreciation of such TV shows depended not on gender so much as the understanding of particular gender role expectations and the conventions that govern them. The Acts of Andrew offer Maximillia as a positive figure, and Euclidia is usually viewed as Maximillia’s evil twin. Moore, however, notes the expectation in that time that slaves would service the sexual needs of their masters. Clothing distinguished honorable matrons from freedwomen, and this came to be codified in Roman law. The ruse in Acts of Andrew runs counter to Roman ethics of marriage. Roman comedies contrast angry wives with prostitutes and slave girls, who are still considered rivals even if not competing for honor. Maximillia essentially serves as pimp for her husband, something unimaginable in non-Christian Roman storytelling. Slaves are often found in disguise or role-playing in the comedies. Slaves’ free will could only be expressed through deceit. Euclidia’s requests and actions thus fit well with what is found in the comedies. She could hope to be accepted as a concubine after she is freed, and thereby to raise her status. She does not behave as a bad slave, but within the framework of expected roles. Maximillia, on the other hand, breaks the conventions of the household codes, not least inasmuch as she is the one making the choice of sexual partner for her husband. In the question time, Mikita Brottman’s book High Theory/Low Culture was mentioned. Classicists have been exploring the way stories transgress hard and fast divisions between classes and conventions. Sex with wives was for the production of children, and childbirth was extremely risky, and so there was a rationale for why the elite had few legitimate children, and men typically had sex more frequently with women other than their wives. Bart Ehrman mentioned work that Jennifer Knust and Dale Martin are doing on porneia. Phil Harland mentioned the popularity of status-switching in Greek fiction, and asked how it relates to the features Moore presented on in Acts of Andrew. Jamet Spittler noted that the attempts at disguise or temporary enslavement consistently fail to work in the novels. In Acts of Andrew, the wife jeopardizes rather than defends the honor of the household, and drives rather than follows him to suicide. This resembles how soap operas assume conventions but also turn them on their head.

The session after lunch will be the last of the conference, and is the one that I will be presenting in, on the Gospel of Jesus’ Wife. 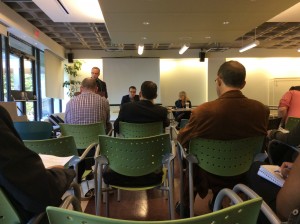 September 26, 2015 #YCAS2015 The Final Session
Recent Comments
0 | Leave a Comment
"You have provided no basis for your assertions. Until you do my post from real ..."
Bob Shiloh Understanding Whiteness
"Does Mark Bilby assert only a "hypothetical reconstruction," or is he claiming to have discovered ..."
C Randolph Ross Historical Jesus Comparisons
"The meme quotes you but the blog post you like to says you quoted it ..."
giraffedog9 The Most Extraordinary and Implausible Inventions ..."
"As far as I can see, Albert Schweitzer still has the last word on this ..."
Daniel Liechty Historical Jesus Comparisons
Browse Our Archives
get the latest from
Religion Prof: The Blog of James F. McGrath
Sign up for our newsletter
POPULAR AT PATHEOS Progressive Christian
1