The final session after lunch was focused on the Gospel of Jesus' Wife. We did things slightly differently, not leaving Q&A in between papers but only after, since the session had a respondent. Brent Landau chaired, comparing the matter of GJW to a soap opera, and inviting the audience to ask for clarification if they “missed an episode.”

The session proper began with Carrie Schroeder looking at matters such as how women were referred to in online discourse about GJW, the role of blogging vs. traditional print media in the unfolding discussion, and the roles of traditional elite research institutions like Harvard, vs. the role of independent scholars, grad students, and educators at much less elite institutions, in the whole matter. Schroeder made a lot of good points, but the way misogyny is still seen in the academy, in academic publishing, and in the harassment women experience online are things her paper covered which I really want to highlight, as things the GJW discussion brings to light and which arguably deserves even more attention that the papyrus fragment itself. Schroeder highlighted how GJW brought into focus the differences between scientific and humanistic approaches, and the limits of each. Authenticity as safeguarded by scholarship, and suspicion towards online scholarship, have also been brought into focus. The scientific tests did not and cannot point to definitive conclusions in a matter like this, and yet the media has looked to science to do precisely that. It was rather humanistic methods which showed GJW to be a forgery. Schroeder quoted Roberta Mazza's “Faces and Voices” blog. Unfortunately antiquities and Biblical studies blogs do not interact as often as we should. The ethical issues related to scholarship about looted artifacts and texts deserves more consideration. In the case of GJW, digital and traditional print scholarship largely unfolded on parallel but separate tracks. Yet the articles in NTS in many cases started online. Harvard, on the other hand, avoided and eschewed online and social media engagement. Schroeder quoted Bonnie Stewart's work concerning scholarship on Twitter. She also shared a word cloud of the names mentioned in the posts on Mark Goodacre's blog, which highlights the extent to which male voices dominated. Charles Haws' studies of demographic data regarding PhD work in Biblical and religious studies, and the data makes clear that there is a “leaky pipeline” – even though the number of women doing PhDs has increased, the numbers are lower comparatively, and fewer women complete their PhDs. The example of the harassment experienced by Mary Beard illustrates how much time female academics have to devote to addressing troll attacks and other forms of misogyny, which may justify King staying off social media as matters unfolded in relation to GJW. But this meant that unfortunately the conversation often happened without her. How might we improve things, and stop marginalizing women's voices in the academy and in public? Harvard's approach, involving a model of scarcity of information, is not the best solution. 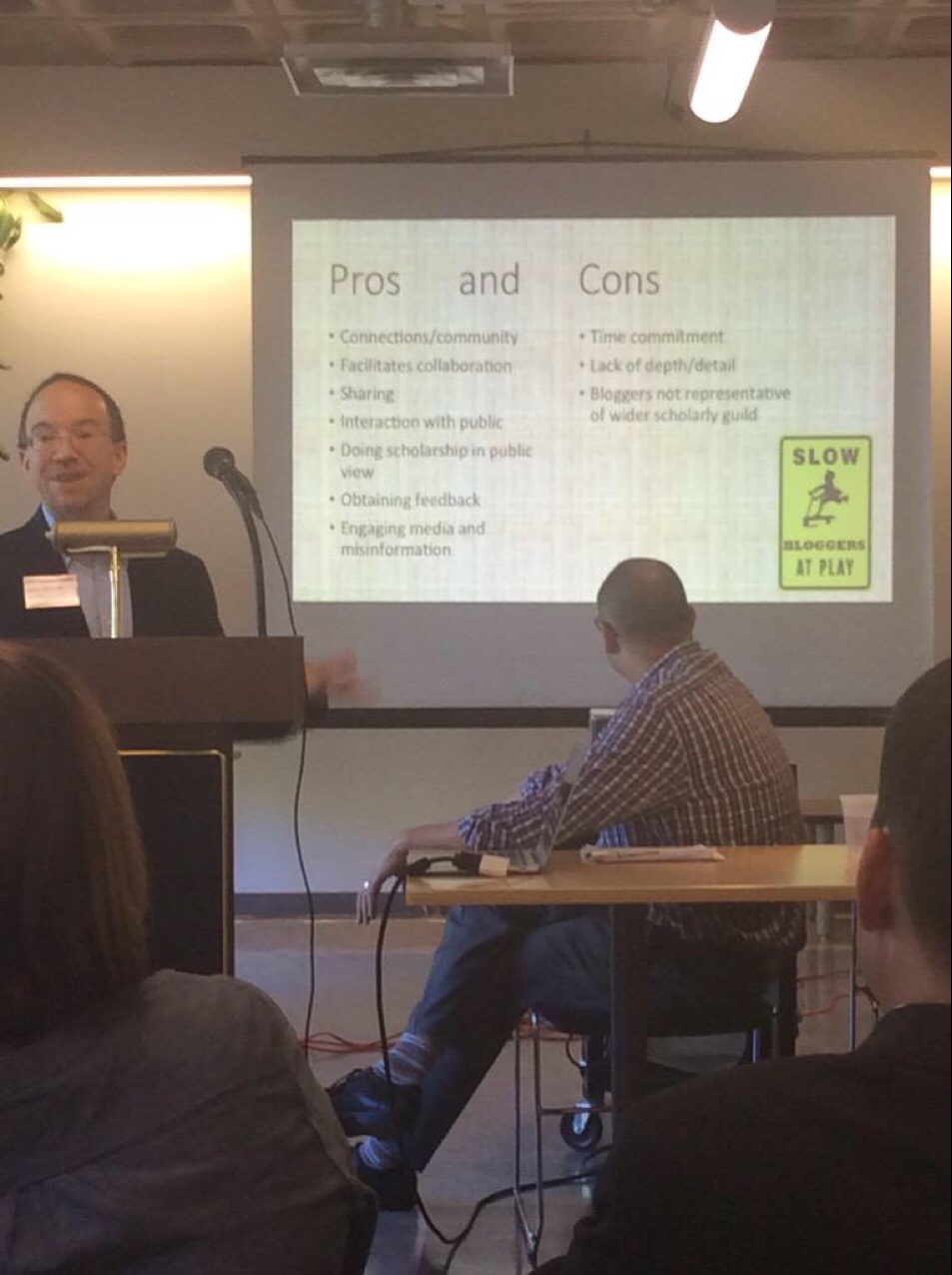 My own presentation was about the role of blogs in the unfolding GJW saga. My main point can be summed up by this quote from my paper: “it is not the rightness of conclusions which defines scholarship, but the methods whereby those right conclusions are drawn. I am concerned that some bloggers happened to turn out to be right, after having made up their minds prematurely, before the evidence available, and the arguments made about that evidence, justified the conclusions that they drew.” (I put “tweet this” on the slide together with the first sentence I just quoted, which got a few laughs, as I hoped it might). The rest of my time was spent looking at what a positive contribution to speed, communication, and collaboration blogs and other forms of online interaction can make, and how we can avoid losing the things that historically made scholarship strong and valuable in the process. I am sure I will share more about my paper, and further thoughts I have as a result of presenting it and receiving feedback, in future blog posts.

Mark Goodacre followed and also looked at the role of blogging in relation to study of GJW, bringing the media and also The Da Vinci Code into the picture as well. Mark shared that he felt persuaded early on that the papyrus was a forgery, but that Andrew Bernhard made the definitive case by recognizing that there was not just a similarity to the Gospel of Thomas, but a resemblance to Grondin's online interlinear, including a typo Grondin had made. King has complained that all the focus has been on the question of forgery, and not on interpreting the text either in its ancient or modern context. Goodacre proposed to do just that, looking at how The Da Vinci Code prepared the way for a fragment like this, and was explicitly mentioned in reporting about the papyrus from the beginning. Goodacre also discussed Simcha Jacobovich's appeal to the text as confirming his claims in The Jesus Family Tomb – and Jacobovich's statements about those he calls the “underwear bloggers,” because he imagines them staying up all night blogging about him in their underwear.

Janet Spittler concluded the formal part of the session as respondent. She responded to the presenters in reverse order, starting with Mark Goodacre. Spittler pointed out that in Mormon circles in the middle of the 19th century were already discussing the possibility of Jesus having been married, claiming that the wedding at Cana was one of Jesus' own weddings. In response to The Da Vinci Code, the LDS church emphasized that belief in a married Jesus is not one of their official teachings. Spittler asked whether the Nag Hammadi texts were known to Kazantzakis. Many have discussed the possibility of a married Jesus – what is new with Dan Brown is the idea that Jesus having been married is inherently feminist. Interestingly and ironically, at that very point in the novel Landon engages in mansplaining, while Sophie struggles. Spittler mentioned being a lurker on my blog, something that others have also indicated earlier in the conference. She pushed back on a few points. The list of bloggers who commented that I provided included only one women. She said that we need to address what we do to change the fact that blogs are dominated by straight white guys and bigots. My reference to the casual tone of blogs deserved Spittler's comments – the fact that scholars speak in misogynistic ways on blogs while they might not in peer reviewed publications is due to the casual tone, but that just means that we see clearly what we might not see but guess is there in other contexts. How do we eliminate online rape threats, which will probably be the last dying gasp of misogyny even when other issues manage to be dealt with. In relation to Schroeder's presentation, Spittler suggests that blogging may indeed be able to do better than traditional scholarship, but gender inequity and other such issues do cut across that and is discouraging. She agreed with Schroeder's final point that we cannot cede the digital terrain. Spittler suggests that GJW has provided a perfect storm which has shown what is good and also bad among us and in what we do.

An opportunity was given to the panelists to talk to one another first after this. Schroeder pointed out that, in contrast to earlier feminist interpretation, The Da Vinci Code resexualized Mary Magdalene. Goodacre shared his initial reaction to Christian Askeland's reference to the “ugly sister in law” of the Gospel of Jesus' Wife, and how he felt after being called on it. It is good that things like this are being brought out into the open. They do, of course, come out in other ways, at conferences and in peer review reports, for instance.

In the open discussion, Bart Ehrman asked what can be done to address the fact that small numbers of women apply to PhD programs in Biblical studies and ancient Christianity. Anne Moore mentioned that women may predominate in the undergraduate classroom, but the dip comes later, and this is because a workaholic ethos in the academy discourages women from pursuing academic careers. And so a key issue is to address work-life balance, and the fact that having a baby is a valid reason for taking more time to finish a book. In other professions, like law and medicine, better accommodations have been made. But discipline may also be a factor. Many women view the history of Christianity as male history which excluded female voices, and cannot imagine what it has to do with them. There are systemic issues too, one of which is because having babies is thought of as a “women's problem” – paternity leave, and men taking responsibility for child-rearing, is a positive move. We need more research on how scholars may be prone to marginalize other scholars or non-scholars, and how it is similar or different online. One thing I noted in the longer version of my paper is the important role that hobbyists, independent scholars, and student played in making progress in studying GJW. There was some discussion Evangelical marginalization of women and how that is reflected in Biblical scholarship, even outside of Evangelical circles. Janet Spittler made the great point that no one suspects bias when straight white men find a straight white Jesus. Anne Watson described the experience of happening to be in Seoul, Korea when The Da Vinci Code movie came out, and the very different response of churches there from what we saw in the United States, holding workshops rather than discouraging people from seeing it. Brent Landau asked what we can do to address the lack of gender parity in our fields, and jokingly suggested that it might be interesting to do a study of mansplaining in Christian apocrypha. Spittler mentioned that, while we might have more men applying, sometimes the group of the best applicants may have better representation of women. She also mentioned the Tumblr “Congratulations, you have an all male panel!” Sometimes asking for a specialist in Paul may make it unlikely that you will attract female candidates. Brandon Hawk pointed out that, while this issue predominates in early Christian studies, there are scholars who write about the Bible and Christian apocrypha within other fields and departmental contexts, and it is to the credit of this symposium that it drew in a wide and interdisciplinary way. Another commenter mentioned the positive impact that providing mentorship for women can have, but also that cliques and dinners can divide and exclude. 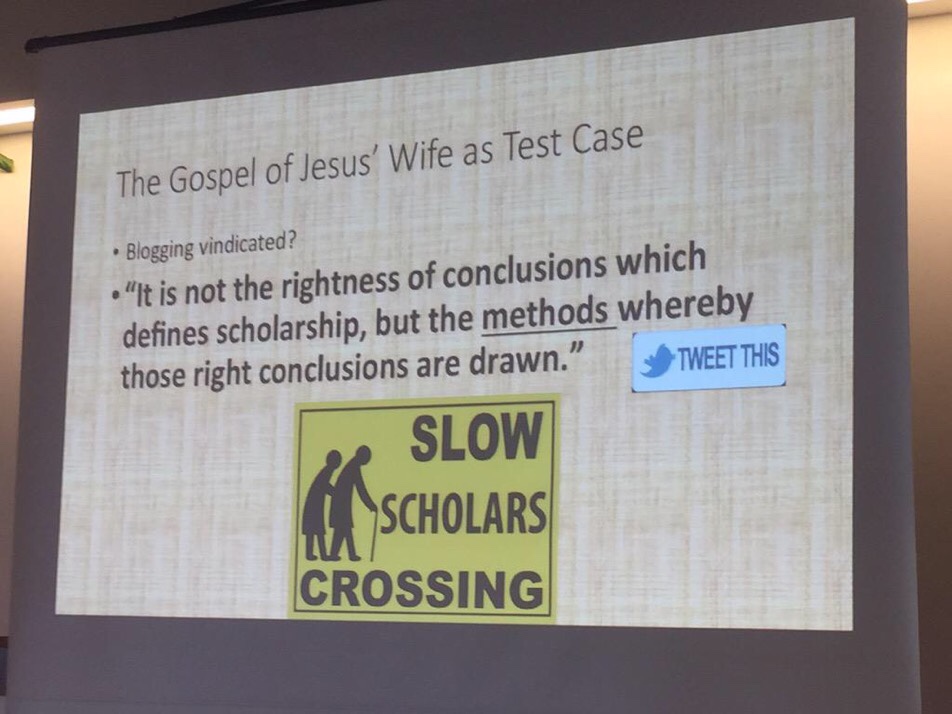