2021 turned out to be the year when I couldn’t manage to keep up my rhythm of sharing a blog post every single day. Having committed to not writing very short posts, perhaps it was only a matter of time. Newspaper columnists traditionally offered something weekly in most cases, and so perhaps aiming to share something worth reading every day was overly ambitious. However, I do think that the context of the pandemic was the key factor. Let’s be honest, no matter who we are or what we do for a living, this has been a draining year, even if it had rewarding moments. Mine certainly did and I hope yours did too. In this post, I’ll focus on looking back at which posts on the ReligionProf blog got the most visits during 2021. I will do other kinds of retrospectives and prospective posts in the not too distant future. For instance, I will write more about the coming calendar year’s research, writing, and teaching projects in blog posts in the new year. All of them are at least started and I believe I’ve mentioned most of them here before, but even if I haven’t, you can be sure that little details that seem noteworthy as I research will prompt me to write blog posts. These include:

So on to the list of top ten blog posts. I will rank and highlight the posts that got the most traffic during 2021 regardless of when they were written. If I didn’t include older posts but limited it to ones written during 2021, then other blog posts from this year that are in the top 20 when reckoning the way I am here would make it into the top ten. Among these are “Jesus Wasn’t Unique” and “Tampering with the Words of the Bible.” In my countdown of the posts with the most views this year, I will save the #10 blog post by pageviews until later since the reason it got so much traffic is the same as for another post on the list, and so it makes sense to mention them together then.

Ninth on the list is a tutorial I wrote in 2012 about how to deal with the input menu persistently appearing on the screen of particular models of Insignia TVs. In 8th and 6th place are two posts from May of 2021 about conservative Evangelicalism in our time: “Is Evangelical Christianity Irredeemably Patriarchal?” and “Evil Rooted in Christianity” – the latter focusing on something Marjorie Taylor Greene tweeted.

Seventh is one that went viral just recently because of Christmas, a post from last year with a parody of “Mary Did You Know” called “Yes I Freakin’ Knew.” Next in the countdown, in 6th and 5th place, are two posts related to the January 6th insurrection: “When Prophecy Failed: QAnon in Light of the Sociology of Religion” and “Evangelicals and the Big Lie.”

Evangelicals and the Big Lie

Third is a post from last year responding to Eric Metaxas about whether Jesus had “white privilege.” I’ll now share the #10 post, “The Immorality of Pro-Life” which I wrote in 2016. Patheos has shared both these posts repeatedly on their Progressive Christian Facebook page, so frequently in fact that I and other have gotten tired of them doing so. Yet each time there were comments and likes from people who hadn’t seen the post in question before before.

Did Jesus Have White Privilege?

The second most traffic was to a post I wrote many years ago now about a particularly effective squirrel baffle that comes free with your bird food. I’ve since moved to using a slinky and that has proven effective as well. And the post with the most pageviews this past year was “Jesus According to AI” which got a lot of attention because it was shared on social media by Deepak Chopra:

Jesus according to AI

Which post from my blog written this year was your favorite? Which would be your favorite post of all time? Since the blog has moved and there have been changes to the platform behind the scenes there’s no way of finding out which is the most visited post of all time. But I’m much more interested in finding out what posts were most meaningful to readers than which ones received the most visits (which may not have done so because they connected with you in some deeper way than solving a problem related to a TV or squirrels).

Thank you for reading my blog! I wish you a happy and healthy 2022!

Finally, here are some other things from bloggers who are looking back and forward, which may be of interest:

Top 10 Discoveries in Biblical Archaeology in 2021

Ha-Aretz has a retrospective on the biggest archaeological finds related to Christianity from the past year.

Gizmodo looked back at notables who died during 2021 as well as listing the best gadgets of the year. NASA looked back on the year’s disasters.

Ken Schenck offered his look at what he has done during the past year and might idealistically do I next.

Annual Top 10: Into The Fire out Of The Fire

This Year Sucked, Just Like the Last One. Now What? 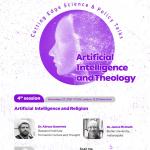 January 3, 2022 Revamping the Bible
Recent Comments
0 | Leave a Comment
"I tried ChatGPT to have it describe me with some basic info on me I ..."
David Garshaw ChatGPT-3 Imitates James McGrath
"KJV people"
Thomas Dickensheets Fundamentalist Church History Chart
"That's kind of a weird coincidence but I was just commenting on the extraordinary claims ..."
John MacDonald Extraordinary Claims and Extraordinary Evidence
"I think it's Rudy Guiliani (seen here https://www.youtube.com/wat... interacting with a famous friend of Jeffrey ..."
Choose Wisely Kirk Cameron at the Indianapolis Public ..."
Browse Our Archives
Related posts from Religion Prof: The Blog of James F. McGrath