As I look over our thirty most-read posts in 2021, I’m reminded of the trademark eclecticism that makes me not just an Anxious Bench contributor, but one of its devoted readers. Where else can you find Philip Jenkins writing about Alice Walker (#27) one day and the “religious nones” (#28) another? (Or Tal Howard writing a moving meditation on Christmas prompted by the launch of a telescope?) And if our regular contributors ever fall into predictable patterns, we’ve got guests to shake things up, from Janel Kragt Bakker asking what Abraham Kuyper has to do with Josh Hawley (#16) to Tim Gloege remembering Rush Limbaugh (#25).

Still, a couple of recurring themes overwhelmingly prevailed in this particular year-in-review.

Not COVID. Compare this year’s list to the one for 2020, and it’s clear that pandemic fatigue has long since set in among our readers.

Not religion and politics. While I’ve already mentioned Hawley and Limbaugh, our only other really popular post in that vein was my response to the January 6th insurrection (#23).

And while Dan Williams did write about a theological question separating mainline from evangelical Protestants (#30), this year featured a bit less agonizing than usual over what defines the latter term. Instead, our most-read posts tended to eschew what David Swartz called “innocent readings” of evangelical history (#26), as we instead probed evangelical views on two hot button issues.

Second, and far outpacing all other topics in popularity with readers, gender.

You might have noticed that we’ve barely scratched the top 20 of our list, virtually all of which had one or two things in common: those posts were written by women and/or they were about women.

In fact, my account of the complementarian-egalitarian debate on one evangelical campus (#11) and my recap of some recent twists in the career of Beth Moore (#20) are the only posts left on our list that weren’t written by a woman. Like almost all of our most popular posts, they had to do in some way with the place of women within evangelicalism. For example, Andrea posed two questions to complementarians and one to egalitarians (#19), and guest Sheila Wray Gregoire reported on the effects on women of evangelical sex manuals (#17).

Then all other posts remaining on this year’s most-read list, including nine of the top ten, was written by the two bestselling women on our masthead*: Beth Allison Barr and Kristin Kobes Du Mez. 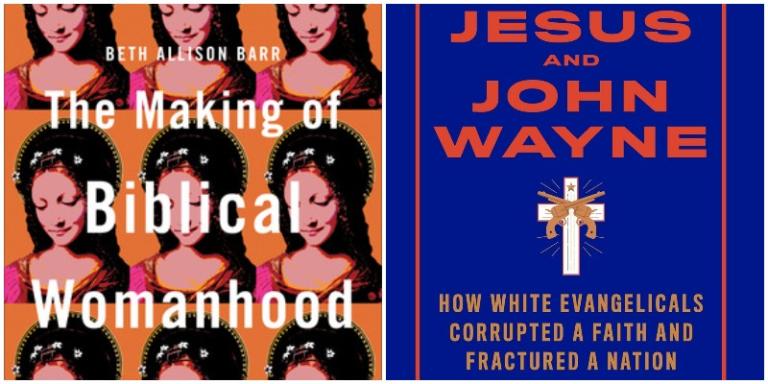 Reformed pastor Kevin DeYoung’s review of The Making of Biblical Womanhood prompted Beth to write three responses: one recalling what a truly helpful review can mean to an author (#12) and the other two deconstructing complementarian uses of church history (#10) and a Bible translation particularly popular with complementarians (#2). Beth had previously tried to correct evangelical misunderstandings of Bible translation more generally (#6) and of the teachings of the Apostle Paul (#4), and she warned not once (#15) but twice (#7) of the smallness of the complementarian world.

Like Beth (#9), Kristin (#8) pondered the cost of writing or not writing a best-selling book about gender and evangelicalism. Before taking a break from blogging to keep following up on Jesus and John Wayne, Kristin also tried to make sense of a fractious meeting of the Southern Baptist Convention, as that denomination grappled with its response to sexual abuse scandals (#5).

While Beth found some reasons to be hopeful about evangelicalism (#18), Kristin warned of that movement’s tendency to punish those who speak truth to evangelical power (#14). So let me leave you all with a sobering fact: our most popular post of the year — at a blog on Patheos’ Evangelical channel — was Kristin’s examination of people loudly quitting evangelicalism (#1).

*They didn’t happen to crack this year’s top 30, but as an AB reader myself, I’m so grateful for the distinctive voices of Melissa Borja, Agnes Howard, and (new in 2021) Nadya Williams. Whether it’s Nadya writing about Judaism, Agnes about food, or Melissa about refugees, each is adept at finding the contemporary relevance of disparate types of history.