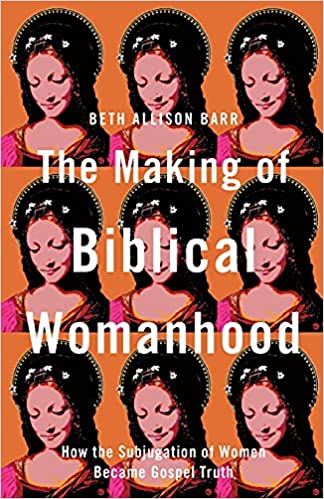 It sat at the end of our counter for almost a week. Beginning of school notices for carpool and parent meetings, along with the odd mail that never seems to have a place, piled on the stapled manila pages. Occasionally, I would pick it up, shake off the mail, and look at it. It was from Brazos Press. We had been discussing a new book project for several months, tentatively titled The Making of Biblical Womanhood, and this was the official contract.

“Are you going to sign that?” my husband asked. His words were familiar by now, recycled in my own thoughts. “I think so,” I would answer. But I really wasn’t sure. I wasn’t sure if I wanted to write it. I wasn’t sure if the cost would be worth it.

Would it be worth it if I was accused of not believing the Bible? I knew the very premise–that ‘biblical womanhood’ (the belief that God calls men to lead and women to follow) wasn’t biblical–would raise questions about my orthodoxy. I knew the unusual approach—historical evidence blended with personal experience—had the potential to be powerful precisely because it required vulnerability. Would it be worth it if my identity as a scholar was questioned because of my identity as a Christian?  Would it be worth it for so many people to know the hardest stories of my life? 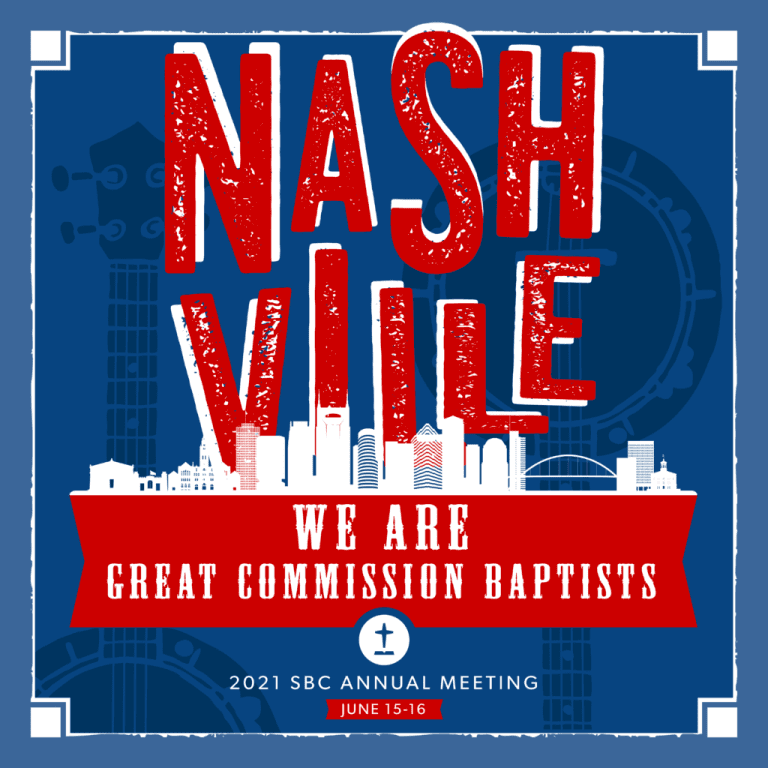 In the final chapter of The Making of Biblical Womanhood, I share the story of Christine de Pizan—a fifteenth-century woman who realized that the battle against misogyny was bigger than her own life. So she fought against it, writing a series of letters against a popular misogynist text called The Romance of the Rose. As I write:

Ideas matter. Ideas that depict women as less than men influence men to treat women as less than men. Ideas that objectify women result in women being treated like objects (sex objects, mostly). So it’s not any surprise that Paige Patterson, who commented on the body of a sixteen year-old girl to a crowd of Christians (resulting in their laughs and applause), shares the same understanding of women’s roles as the Baptist churches involved in the sexual abuse of hundreds of women.23 Christine de Pizan understood that ideas matter. She understood so well that she connected the ideas presented in a popular book to the abuse of an unnamed woman who was trapped in an abusive marriage. She fought for this woman by fighting against damaging ideas about women.

As a Christian woman who grew up in the Southern Baptist world, I agree with Christine de Pizan. She realized that at the root of abusive behavior toward women—physical, emotional, psychological, economic—lay misogynistic ideas about women. She realized that misogyny hurts all of us, whether we recognize it or not, and it especially hurts those already marginalized by economics, education, race, and even religion. Christine used what she had to fight against that misogyny; to love those whom God loves; to help make the lives of women better, even the life of that “poor woman [who] pays too high a price.” Christine realized that to change the lives of women, she first had to change ideas about women.

This week, as I read Russell Moore’s letter to the out-going SBC president J.D. Greear, I couldn’t help but think about Christine de Pizan. A fifteenth-century woman called out the misogynist ideas lurking in popular literature that hurt real women; Russell Moore called out the misogynist ideas lurking inside the Executive Committee of the SBC that led to the botched handling of the sexual abuse crisis.

“What most Southern Baptists do not know,” Moore wrote to Greear, “is how the issue of sexual abuse lurks just below the surface of so much of the controversy of the last few years. . .You and I both heard, in closed door meetings, sexual abuse survivors spoken of in terms of ‘Potiphar’s wife’ and other spurious biblical analogies. The conversations in these closed door meetings were far worse than anything Southern Baptists knew—or the outside world could report. And, as you know, this comes on the heels of a track-record of the Executive Committee staff and others referring to victims as ‘crazy’ and, at least in one case, as worse than the sexual predators themselves.”

Moore was writing specifically to Greear but his audience was the SBC–perhaps even targeting those soon to vote on new leadership at the 2021 convention. Moore makes it clear that the blatant sexism of SBC leaders allowed abuse to flourish among SBC churches. He makes it clear that the victims of SBC sexism are real women–the women who, in the words of Christine de Pizan, “pay too high a price.” Isn’t it interesting how Moore seems to reach some of the same conclusions as a fifteenth-century woman? According to both Christine de Pizan and Russell Moore, ideas matter. Ideas that perceive women as “Potiphar’s wife,” as “whore,” as “crazy” lead to women being treated as Potiphar’s wife, whore, and crazy.

Of course, two years ago I had no idea that Russell Moore would write a letter calling out the misogyny of the SBC. While the actions of SBC leaders like Paige Patterson as well as the open letter written by Beth Moore had confirmed for me how deep the roots of sexism ran within conservative evangelicalism, I still was not thinking about the 2021 SBC presidential election. What I was thinking about was much bigger.

You see, what Moore doesn’t call out is the source behind the sexism—the so-called “biblical” teachings that place women under the power of men.  As Kristin Du Mez writes in Jesus and John Wayne: How White Evangelicals Corrupted a Faith and Fractured a Nation (just released in paperback this week), conservative evangelicals preach “a mutually reinforcing vision of Christian masculinity—of patriarchy and submission, sex and power. It was a vision that promised protection for women but left women without defense, one that worshiped power and turned a blind eye to justice, and one that transformed the Jesus of the Gospels into an image of their own making.”

Ideas do matter, and ideas that teach women are less than men lead to men treating women as less than men. Russell Moore testifies to this with his own hand as he details how SBC leaders resisted helping the victims of sexual abuse. It seems no accident that the men who insist on the subordination of women within their denominational identity also proved themselves more concerned about maintaining denominational power than about protecting Baptist women. I cannot help but think about the words of Beth Moore: “Then I realized it was not over Scripture at all. It was over sin. It was over power. It was over misogyny. Sexism. It was about arrogance. Protecting systems. It involved covering abuses & misuses of power. Shepherds guarding other shepherds instead of guarding the sheep.”

I confess, on the morning of August 6, 2019, I was still afraid about the personal cost to me. I remember watching my daughter  as she sat at the kitchen bar, eating a chocolate-chip muffin. My son wandered into the kitchen, sleep still blearing his eyes. And suddenly I realized the cost of writing The Making of Biblical Womanhood was worth it. Because it wasn’t about me. It was about my children. It was about the women I had taught and mentored. It was about the women in my evangelical world who, in the words of Christine de Pizan, paid too high a price for dangerous ideas held by men.

Over the past few weeks, as The Making of Biblical Womanhood has circulated more quickly than I would have ever imagined, readers have been struck with two lines in particular (from chapters 7 and 8). I know this because readers have quoted them over and over again on social media and in their reviews. I find these lines rather fitting in light of the upcoming SBC convention: 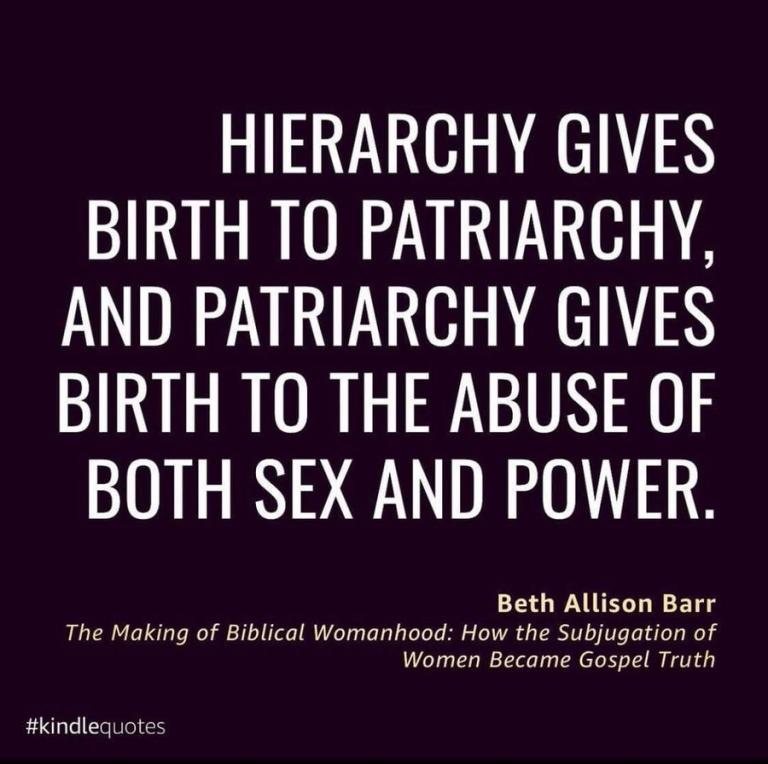 “The greatest trick the devil ever pulled was convincing Christians that oppression is godly.”

I signed the contract for The Making of Biblical Womanhood because I realized the cost to me was small compared to the good it could do for evangelical women. My prayer is that those attending the 2021 SBC will realize the same. I hope they realize that the cost of not speaking out against the sexism and racism rampant within their Baptist denomination–of allowing the status quo to remain in power–will be far greater than the cost of simply speaking up.

June 8, 2021
The Religious History of Extraterrestrial Life
Next Post 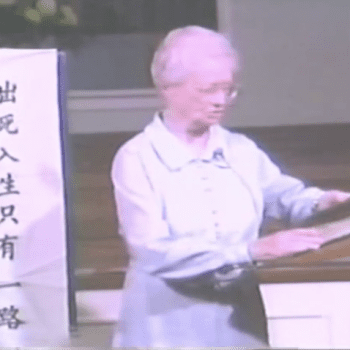