Not So Groovy, Baby: How Evangelical Sex Advice Got Stuck in the 1970s

Today I’m happy to welcome Sheila Wray Gregoire to The Anxious Bench. Her new book with Rebecca Gregoire Lindenbach and Joanna Sawatsky, The Great Sex Rescue: The Lies You’ve Been Taught and How to Recover What God Intended (Baker, 2021), presents their findings from the largest study of evangelical women’s marital and sexual satisfaction to date.

It’s highly unlikely that Queen Victoria ever advised a young protégé on the eve of her nuptials to “lie back and think of England,” despite the urban legend. In fact, the Queen, who bore nine children to a husband she adored, probably enjoyed an enthusiastic love life with her Albert, and many historians suspect she had an active sex life after her husband’s death.

But the era which was named after her popularized women’s sexual reticence. As men left to work in factories, women kept the home fires burning. The “angel of the house” archetype of the wife was born: the pure, godly, submissive woman who tamed the more base desires of the husband so the family could flourish.

This idea dovetailed nicely with the church’s emphasis on the nuclear family, and since the church had such influence over society’s sexual norms, this view remained preeminent for over a century.

And then the sexual revolution hit.

Tim LaHaye burst on the scene with his runaway best-seller The Act of Marriage, written in 1976. LaHaye was one of the first within evangelicalism to adopt the teaching that both men and women can, and should, experience profound sexual pleasure in their marriages. Yet, despite dabbling in female liberation, he still overwhelmingly saw women in terms of Victorian naivete: ”Their maidenly inhibitions and misconceptions compel them to lie on their backs and allow the vigorous young husbands to satisfy themselves.” 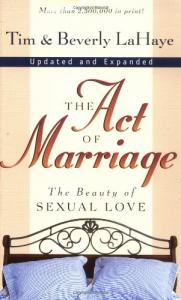 While women could enjoy sex, LaHaye still believed women didn’t naturally want it, but needed to be awakened to it. And “need” was the operative word, because if a wife didn’t embrace sex, a husband might become entrapped by his secretary. Men, apparently, are constantly tempted to lust or have affairs but wives, by making themselves readily available, can save men from themselves. “When you have a Cadillac in the garage, how can you be tempted to steal a Volkswagen off the street?’”

Since then, rather than evolving its understanding of female sexuality, the evangelical church has stubbornly clung to this 1970s resurgence of Victorianism, as if frozen in place. Emerson Eggerichs in Love & Respect (2004) echoes LaHaye’s approach — minus the female pleasure part. He tells women: “If your husband is typical, he has a need you don’t have.” And what is that need? It’s for one-way “physical release” (wives only need “emotional release”). In Eggerichs’ depiction, intimacy and female pleasure never enter the equation.

His Needs, Her Needs (1986), Power of a Praying Wife (1997), and For Women Only (2004), among others, continue in the same vein: men need sex, and women need affection. In fact, men’s need for sex is so deep that most women can never truly comprehend it.

In perpetuating the Victorian Christian sexual ethic, though, evangelicalism’s rejection of women’s sexuality has left the church in a pickle. If women don’t want sex, but men need it so desperately, how do we get women to provide it?

And so the threats, epitomized almost a half century ago by LaHaye’s Cadillacs and Volkswagens, are repeated. Emerson Eggerichs tells women that their husbands will “come under satanic attack when deprived of physical release,” and claims that “men are often lured into affairs because they are sexually deprived at home.” The solution? A wife should “minister to her husband sexually… as unto Jesus Christ,” especially since it takes “such a short amount of time.”

But as Rachael Denhollander pointed out late last week, it’s not that simple. All her life Anna Duggar has been primed by the church to believe that her husband’s sexual deviancy was due to her sexual shortcomings. “Telling women to be more sexually available to help their husband keep it in his pants is the norm, not the exception. Women are taught as the cause and solution to men’s sexual perversions.” Is it any wonder that so many women feel stuck?

We’ve talked about his sexual needs like it’s impossible to go more than a few days without release, but couched her sexuality as existing solely for his benefit. We’ve turned women into dangerous beings who control whether men “fall”, and also into the solution for it. 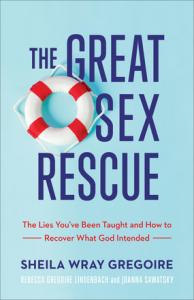 It is well past time to chart a new course that promotes a truly biblical sexual ethic. The Bible does not tell women to have sex to cure men’s lust. It tells men to put lust to death (Col. 3:5). Scripture does not present sex as revolving around a husband’s physical release, but rather as a beautiful picture of a mutual, intimate, pleasurable experience for both (Gen 4:1; Song of Songs; 1 Cor. 7:3-5).

Maybe, with that picture of sexuality, women in Anna Duggar’s position would see sexual deviancy as red flags about their partner, not about themselves. Maybe then the church’s question to women would no longer be, “Did you do enough in bed to stop this?” but rather, “how can we support you and get you and your children safe?”

May 12, 2021 The Scandal of Patriarchy in My Evangelical Mind
Recent Comments
0 | Leave a Comment
"So you admit you’re for the domination of women because of your own insecurity and ..."
KDNDLKJ How Will the Pro-Life Movement Address ..."
"Roe V. Wade is TOAST ! hahahahahahahahaha! take that!"
Mister Magnificent How Will the Pro-Life Movement Address ..."
"Very interesting...and troubling. Thanks for bringing to attention. Some of the paranoia and conspiracy thinking ..."
OrthoAnabaptist From the Russian Empire to the ..."
"Thanks for the history! It's hard for a Western Baptist to grasp the interest in ..."
Roger McKinney Icons, Russia, and a Church’s Dark ..."
Browse Our Archives
Related posts from Anxious Bench

Will you pray to change the world?
Last week, I announced my decision to become the theologian-in-residence for GTN....
view all Evangelical blogs
What Are Your Thoughts?leave a comment
Copyright 2008-2021, Patheos. All rights reserved.
Close Ad