Will This Week Bring an Epiphany for Evangelicals?

I’ve read much nastier negative comments in my time as a blogger, but few that cut so deeply as the one response I got to my Thursday afternoon post on pastors serving in Congress:

An historic insurrection occurs in the US capital building, it’s invaded for the first time since 1814, and the insurrectionists are parading around inside waving confederate flags, and this is all you can think of to post? Disappointing to say the least. Also an abdication of this blog’s role and responsibility as a space of public discussion by (among others) professional historians.

At one level, it’s easy for me to disregard the critique. I don’t think anyone can reasonably accuse me of writing too little about Donald Trump and the damage he’s done to American democracy. In any event, Thursday’s post was already an extra one for me; I’d previously written in my usual spot, a day before the Capitol invasion.

But I do agree it would be disappointing for this blog to get to the end of this historic week having said nothing in direct response to such shocking events.

So for the first time I can remember, I’ll write a third Anxious Bench post in the space of just five days. (I’ll try to make up for it by sharing at least part of my other January slots with other writers.) The way our blog works, even the blogmeister can only speak for himself, but I’ll invite my colleagues to offer their own responses. In fact, there are other people on our roster whose particular expertise leaves them much better qualified than me to respond as “professional historians” to a historic moment for the United States.

I hope that House speaker Nancy Pelosi was on to something when she noted that January 6th happened to be an important date in the Christian calendar, the Feast of Epiphany. “On this day of revelation,” she told fellow legislators, “let us pray that this instigation to violence will provide an epiphany for our country to heal.” It wasn’t just liberal Catholics thinking along those lines. The following day, Christianity Today published a powerful essay by evangelical Anglican priest Tish Harrison Warren, reflecting on the “strange Epiphany we had in the United States.”

Not just a single date, Epiphany is the season in the liturgical year when Christians focus on how Christ is made known to the world. It started on Wednesday with prophecy from Isaiah (“Arise, shine; for your light has come, and the glory of the LORD has risen upon you…Nations shall come to your light, and kings to the brightness of your dawn”) and Matthew’s story of that light reaching wise men in the East. In the weeks to come, we’ll read Mark’s accounts of John the Baptist proclaiming the coming of the Messiah, that savior calling his first disciples, and Jesus beginning to preach and perform miracles. Before the calendar turns to Lent and then Easter, Epiphany culminates with Jesus transfigured, the Father proclaiming “This is my Son, the Beloved; listen to him!”

As Pelosi hinted and Warren explained, the name of this season “comes from the word reveal and gestures toward a realization of the truth. To have an epiphany is to grasp reality, to receive insight. In these gospel stories, followers of Jesus begin to slowly understand who he is. They glimpse the truth: The light of the world has come to all people and all ethnic groups.”

So Epiphany is about evangelism — sharing that light with all peoples — and discipleship — better understanding who Jesus is and what it means to follow him.

In 2021, I pray that evangelicals will pay at least as much attention to the latter task as the former. For whatever else they need to do this year, we must come to terms with how “decades of poor catechesis and spiritual formation” — in Harrison’s words — have made millions of evangelicals participants in the current political crisis. If she’s right, we should take seriously her argument that Wednesday’s “atrocity was in large part brought to us by the white, evangelical church in America.”

(I won’t rehash that argument in depth. But if you instinctively reject her thesis, please refer to any of the endless array of posts about Trump published since 2016 at a blog I’ve called “the uneasy conscience of modern evangelicalism.”)

In short, this Epiphany I hope that evangelicals will start to see the light.

First, that means that they need to see the darkness. For the light promised in Isaiah 60 shines as brightly as it does because of what we read in between the two verses I quoted above: “For darkness shall cover the earth, and thick darkness the peoples” (v 2). Any number of darknesses still cover our corner of the earth, including the one that Kristin addressed instead of the Capitol invasion on Thursday morning: the racial injustice that Jemar Tisby challenges us to confront. But we can’t begin to see the true thickness of such darknesses if we don’t first recognize that we’re often blind to truth itself. We’ll never “grasp reality” if we continue to discredit expertise and rational inquiry and credit instead the conspiracy theories and manipulative rhetoric that incited Americans to desecrate what’s truly a sacred site for our democracy.

Second, Epiphany should be a time that we turn from false lords to follow the true Lord — a nonviolent insurrection that Christians can wholeheartedly support. “Epiphany tells us of Jesus’ kingship over all the nations,” continued Warren, and the events of this week “show us what happens when we invert that message: Christian faith is used as a tool to prop up political power.” In a season that starts with the story of the Magi, she warns that evangelical support of MAGA has empowered a president who will deploy any means — including sedition — to achieve his ends. “Like Herod,” she writes, Donald Trump “is happy to use religious leaders as pawns.” And so will the demagogues already lining up to succeed him, like Senators Ted Cruz and Josh Hawley and some of the sixty-some evangelicals in the House of Representatives who also objected to the certification of Joe Biden’s election.

They’ll succeed unless millions of Trump-backing evangelicals heed a third theme of Epiphany: repentance. Tomorrow we’ll hear how John the Baptist came as a witness to the light that the darkness could not overcome, “proclaiming a baptism of repentance for the forgiveness of sins” (Mark 1:4). And after that message got John arrested (and later murdered) by Herod, Jesus “came to Galilee, proclaiming the good news of God, and saying, ‘The time is fulfilled, and the kingdom of God has come near; repent, and believe in the good news'” (Mark 1:14-15).

No doubt, Trump-opposing Christians like me have our own sins to repent — our own false lords to overthrow, our own darknesses to see.

But in January 2021, it would be utterly irresponsible and dishonest to “both-sides” what has led us to a week that started with a president supported by 80% of white evangelicals being caught on tape trying to cajole and bully a fellow Republican into “finding” enough votes to give him victory in a battleground state, that continued with GOP legislators objecting to the results of an election that officials and judges from that same party have again and again deemed free and fair, that reached the point of a mob incited by the president himself storming the U.S. Capitol itself to stop Congress from fulfilling its constitutional duty, and that ends amid serious talk of that lame duck leader being removed from office before he can do worse.

And yet a snap poll from YouGov found that a plurality of Republicans actually supported the invasion of the Capitol. YouGov didn’t ask about religious identity, but given the religious alignment of American politics right now, it’s only logical to assume that a significant number of white evangelicals felt likewise.

So I’m not sure I’m as confident as David Brooks that American society on Wednesday reached “an inflection point, a step back from madness.” But then I don’t expect the epiphany to be sudden. It’s hard work to be honest about lies, to topple false powers, to turn off a road you’ve long followed. I think that’s why Epiphany is a season of discipleship, not a moment of conversion. And it only starts us on the path into two other seasons: one that ends with death, and one that begins with resurrection. 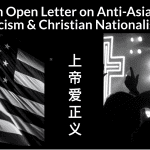 January 11, 2021 "Sanctified Sinophobia" and the Role of Christian Nationalism in Anti-Asian Racism: An Interview with Lucas Kwong
Recent Comments
0 | Leave a Comment
"Clearly it was the forces of patriarchy who sulllied the image of Mary Magdalene, and ..."
Michel Down with the Patriarchy! Remembering the ..."
"I believe this is the tip of the iceberg. Along the line, the "Church Fathers" ..."
Michel Down with the Patriarchy! Remembering the ..."
"I have often thought the same thing. Young people don't appreciate this miracle."
Roger McKinney Google’s Revolution in Historical Research
"Four Horsemen of Apocalypse -The connection of climate-related disasters to plague, pandemic, and pestilence is ..."
Epiphany Mirabeth These Are The Ways The World ..."
Browse Our Archives
Related posts from Anxious Bench