The Importance of Beth Moore in Recent American Religious History

Not quite five years ago, Philip wrote a series here on what it would look like to write and teach what he called very recent history. “If you were writing a history of the United States in the 21st century,” he asked, “what would you include, and how would you tell the story?” This afternoon, it’s struck me that anyone taking on a religious version of that assignment would surely have to tell the story of one particularly significant American Christian: Beth Moore.

. @BethMooreLPM said the #SBC has been her family, her tribe and her world. But she is walking away, saying the denomination's public witness has been poisoned. https://t.co/mmUXj3kQlv

(Important as this is within a purely Baptist context, read the article and you’ll see that this one decision connects to all sorts of larger themes central to any recent history of evangelicalism in America: the role of women in that movement, sexual abuse within its churches, debates over race and racism, and the meaning of evangelical support for Donald Trump.)

Keeping in mind Philip’s caution that we “tend to be very presentist, seeing significance in things fresh off the headlines,” that this afternoon’s headline has stirred such a strong response shouldn’t be a surprise to our readers. Since 2018, when Moore wrote an open letter to evangelical men, calling out the misogyny she had experienced in her years as a Bible teacher and author in the SBC, we’ve written several posts about her:

• Most of them have come from Beth Allison Barr, whose own book challenging conservative Baptist and evangelical views on women is due out next month. In April 2018, she explained how “Beth Moore could influence women against evangelical ideas about biblical womanhood,” then a year later both offered a historical perspective on Moore as a preaching woman and unpacked a Twitter debate between Moore and Baptist theologian Denny Burk on complementarianism.

• Speaking of… over the weekend, Burk had criticized Kristin Du Mez’s book, Jesus and John Wayne, which prompted this response (among many others):

What I have zero respect for is when people read books that confront their stands or interpretations and come out of it having learned absolutely nothing. Never, “I was convicted about that because I think she’s got a point there.” Never, “I see how that could be abused.”

Seeing that tweet not only reminded me that Kristin had mentioned Beth Moore’s criticism of Trump in J&JW, but that she once blogged about Moore on Anxious Bench, in a post that seems even more timely now than it did in 2019.

To help explain why “networks” can matter more than denominational structures within evangelicalism, Kristin pointed to the example of Beth Moore: “As the beloved Bible Study writer with a Twitter following approaching 900,000, Moore has long ministered to evangelical women without disrupting the authority of conservative evangelical networks and gatekeepers.” So now that Moore has publicly distanced herself from the country’s largest evangelical denomination, Kristin’s final observation seems all the more salient:

It remains to be seen what sort of power Beth Moore and the network of evangelical women she has forged will exert in the face of conservative evangelical networks…. In many ways, however, the future of American evangelicalism will unfold in terms of the relative power struggles within and among such networks and coalitions.

• Just last month, another Beth Moore tweet inspired me to look back at the recent history of the expression, “Jesus is not a Republican or a Democrat.” But let me close this brief recap by mentioning my first Beth Moore post…

In the spring of 2018, I imagined a 22nd century historian looking at our present time not as something very recent but quite distant, and asking what had taken place to revive evangelicalism in the 21st century. I suggested Moore’s open letter on sexism and misogyny as a key primary source: not just as an artifact of evangelicals finally taking a hard look at some of their movement’s most deeply-seated problems, but as an early example of women taking leadership of the evangelicalism that — in my hypothetical — had been reformed, renewed, and revived.

But first, I suspect that evangelicalism will go through a painful period of realignment, as people much less famous than Beth Moore make their own choices about how they will and won’t participate in institutions like the SBC. And even if she doesn’t work so clearly within such networks, I suspect that Beth Moore will continue to influence many of those decisions. As Beth (Barr) told Smietana, “If she walks away, she’s going to carry a lot of these women with her.”

March 9, 2021
The Hundred Million: Some History of "Religious Nones"
Next Post 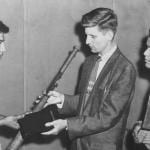 March 10, 2021 The Politics of Punishment in Evangelical America
Recent Comments
0 | Leave a Comment
"In the Spring 2012 edition of the Journal for Biblical Manhood and Womanhood, pg 25, ..."
ZZ The Scandal of Patriarchy in My ..."
"Calling complementarianism patriarchy is dishonest."
Roger McKinney The Scandal of Patriarchy in My ..."
"As I say, it is not my claim, but a statement I am quoting from ..."
philipjenkins Religion’s Sudden Decline
"What is your source for the claim that the US is the 12th least religious ..."
Lark62 Religion’s Sudden Decline
Browse Our Archives
get the latest from
Anxious Bench
Sign up for our newsletter
POPULAR AT PATHEOS Evangelical
1