Will Beth Moore Help Save Evangelicalism?

“Lord, I repent of ways I’ve been complicit in & contributed to 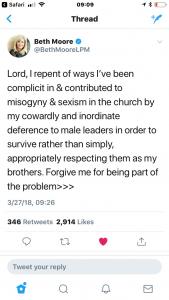 misogyny & sexism in the church by my cowardly and inordinate deference to male leaders in order to survive rather than simply appropriately respecting them as my brothers. Forgive me for being part of the problem.”  Beth Moore tweeted (@BethMooreLPM) this  just last week, March 27 2018.

I almost missed it.

It wasn’t until we were eating Easter dinner a few days later when my mom (who is better on twitter than I am) brought it to my attention. “Did you see Beth Moore’s apology? Is she recanting complementarianism?” I nearly dropped my fork. As soon as it was respectably possible, I left the table and grabbed my phone, searching for the tweet. And there it was: “Lord I repent of ways I’ve been complicit in & contributed to misogyny & sexism in the church by my cowardly and inordinate deference to male leaders..Forgive me for being part of the problem.” She didn’t actually say the word complementarianism, but her language is pretty clear. She apologized for being “part of the problem” of sexism and misogyny in the church by her “cowardly” deference to male leaders.

I had to read the tweet several times before it sunk in.  I even double checked her twitter account to make sure it was real. It was only then that I allowed myself to finally start hoping. Could Beth Moore–popular Southern Baptist preacher and founder of Living Proof Ministries–help turn the tide of complementarian theology?

Now I confess, this had never occurred to me before. Historian Elizabeth Flowers emphasizes how Beth Moore is a “cradle Southern Baptist”–a denomination well known for “their commitment to women’s submission.” As we all know, it was the SBC who famously amended their belief statement to declare that a woman should “submit herself graciously” to her husband’s leadership. Flowers also notes how Beth Moore always “made sure her audience knew that she had her husbands permission to travel, speak, write, and make videos,” and that she seems mostly to side with male spiritual authority even though she has famously confessed reservations about her husband in this area. As Beth Moore insists, God urged her to yield to her husband’s authority.

“Keith wasn’t always a man of faith. In the past, he would go to church as often as he wouldn’t. But God told me to treat Keith as though he were already the spiritual leader of our home.  When I needed advice, I’d think, ‘I don’t even know if Keith has a prayer life. And I’m to ask him what to do’? And God would say ‘yes.'”

Staunch complementarians like John Piper say that it is okay to listen to Beth Moore as a teacher as long as you (men) don’t become dependent on her, which suggests that Beth Moore is not perceived as a threat to their gender hierarchy. As Piper states,

“I want to learn from my wife and I am happy to learn from Beth Moore. But I don’t want to get into a relationship of listening or attending a church were a woman is becoming my pastor, my shepherd or my authority…it is not wrong for you to listen to Beth Moore, but it could become wrong. I think Beth Moore would be happy with that answer. I’ve talked to her about this, and I think she would be OK with what I’ve said. Our paths cross at the Passion Conference every now and then, and we talk.”

Beth Moore even promotes Wayne Grudem’s textbook on Systematic Theology, which (I think) is one of the main reasons complementarianism has become so widespread.

In other words, it never occurred to me that Beth Moore could influence women against evangelical ideas about biblical womanhood. Husbands lead, wives follow. Beth Moore supports this paradigm. Indeed, one of her most often-quoted statements is about submission: “Submission is ducking so that God can hit your husband.”

But I think I was wrong. Let me explain.

First, Beth Moore has been controversial among conservative evangelicals for  sharing a stage with male pastors like John Piper at popular evangelical events and even preaching from the pulpit to Sunday congregations. For example, the Delivered by Grace Blog condemned Beth Moore in a 2016 blog on “Why Your Pastor Should Say ‘No More’ to Beth Moore”.  The pastor and author Josh Buice argues that Beth Moore “Clearly Violates Biblical Boundaries” by publicly teaching at events like the Passion Conference. Christine Pack on Sola Sisters, responding to Beth Moore’s preaching the Sunday morning sermon at Louie Giglio’s church in July 2012, states that since the command from 1 Timothy 2:12 “is not complicated or hard to understand,” then why is “Beth Moore, a widely admired and popular Bible study teacher, given a pass to disobey this clear command from Scripture?” Despite the harsh criticism, she has never backed down from publicly preaching. She has been clear that she is called by God to ministry.

Second, Beth Moore has been articulating concern with male evangelical leaders for quite some time, especially since 2016. Moore made it clear that she does not support Donald Trump nor the evangelical leaders who support him. She publicly speaks against Trump and has urged Christians to follow Jesus instead of pledging allegiance to a political party. As historian Kate Bowler has stated about Beth Moore and female leaders like her: “Several of the most visible and influential of these New Christian Women…have openly criticized Trump….And they’ve watched, in dismay, as male leaders have continued to endorse him.” It didn’t escape my attention that Beth Moore, while endorsing Wayne Grudem’s Systematic Theology book, also endorsed Millard Erickson’s Christian Theology. Grudem promotes complementarianism, while Erickson is a noted egalitarian (promotes equality for women and men).

Third, Beth Moore is one of the most popular teachers and preachers in modern evangelicalism. As my fellow AB blogger Chris Gehrz has written, Beth Moore “has approximately seven times as many [Twitter] follwers as Russell [Moore].”  This is especially significant giving how few female leaders exist–90% of pastors in evangelical churches are men, for example. I have even written in Christianity Today and at the Anxious Bench about how the fear of female leaders persists even in Christian academia. Jonathan Merritt, along with Rachel Held Evans, have called attention to the persistent lack of female speakers and leaders at evangelical conferences. In 2013 he found that women represented only 19% of speakers at major Christian conferences. “We can say that most conferences have some serious work to do if they want their stage to look anything like the 21st century church.” Beth Moore, however, has 863 thousand twitter followers. Just for comparison, Desiring God has 474 thousand twitter followers while the 2019 passion conference has only 192 thousand followers. Beth Moore is also consistently one of the female speakers to preach at major Christian conferences. Her books are consistently best sellers.

If Beth Moore decides to shake American evangelicalism, she has the twitter followers and book readers to do it.

I think what is most important about Beth Moore is that she really isn’t anomalous. Modern Evangelical Americans don’t seem to get this. Beth Moore is not an anomalous figure in church history. In my recent blog series on Paul (which I will finish next time), I have been trying to help evangelical Christians understand that our modern perspective on gender roles stems from a handful of scriptures that have only recently emerged as significantly influential. Women throughout church history were mostly not limited to the lens of Ephesians 5 and 1 Timothy 2 (definitely not in the same way that we use these verse today). Just see my last post, Paul Interrupted: A Medieval Perspective. Despite how rare Beth Moore seems in the mostly masculine world of American Evangelicalism, she fits well within the long history of female preachers, teachers, and leaders from the ancient, medieval and early modern church. For example, more and more evidence suggests that women really were bishops and priests in ancient Christianity–which fits perfectly with Paul’s mention of Priscilla, Phoebe, and Junia. Also, when we move beyond our Western (and mostly North Atlantic) perspective, we find that Beth Moore as a female preacher and leader fits more comfortably in global Christianity. China, for example, has a long history of ordaining women pastors and evangelists. Next time I am going to talk about an Ethiopian female preacher and teacher, Walatta Petros, so stay tuned.  Walatta Petros taught, preached, and called men on the carpet in seventeenth-century Africa–just like Beth Moore does in 21st century America.

One of my friends and fellow scholars has recently commented that Beth Moore could be the “saving grace” of American Evangelicalism. I am really praying she is right. 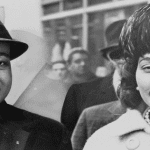 April 6, 2018 Remembering a Lost Holy City
Recent Comments
3 Comments | Leave a Comment
"I know you couldn’t cover everything in such a brief history of evangelicalism, so I ..."
Roger McKinney Can Northern Evangelical Institutions Survive Evangelicalism’s ..."
"Dr. Barr,I believe Dr. Doug Oss was one of the contributors of notes to the ..."
Brian Roden Deconstructing the ESV: A Historian’s Response ..."
"I'm going to say that predatory priests and religious, along with the Magdalene Laundries, represented ..."
Jon Altman The Death Of Christian Ireland – ..."
"Sorry! I'll correct the post in just a second..."
Chris Gehrz “Evangelical”: Past, Present, and Future
Browse Our Archives
get the latest updates from
Anxious Bench
and the Patheos
Evangelical
Channel
POPULAR AT PATHEOS Evangelical
1