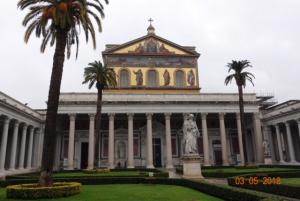 Just a few years ago, my entire family (parents, siblings, aunts, and my grandfather) attended a church service together. The pastor was preaching through Ephesians and had reached chapter 5.

Now, I have to tell you some about my grandfather. He was Baptist most of his life. After his family moved back to Texas from California, they joined Travis Avenue Baptist Church where he eventually met my grandmother. For most of his adult life, after the war, he served as a committed member, Sunday School teacher, and even deacon at Baptist churches in Dallas, Houston, and Ft. Worth (not to mention the ones in California and Illinois). He wouldn’t have identified as Evangelical, but he certainly identified as Baptist.

In short, my grandfather heard Baptist pastors preach once a week if not more (several times a week during revival services) for around 80ish years. By the end of his life, he probably found Ecclesiastes spot on–there wasn’t much new under the sun in regards to sermons.

Which is why it really struck me that Sunday. This particular pastor preached for wives to submit, he preached that women were eternally subordinate to men (more on Bruce Ware and Wayne Grudem about this in a future post), and that women’s primary calling was that of home, family, and obedience. Women’s role in both church and society was to submit to the authority of their husbands. The preacher used an example from a once-popular movie (you may have seen it), My Big Fat Greek Wedding. The matriarch of the family consoles her daughter that even though the husband is the head of the family, the wife is the neck and she can turn the head anyway she wants. The pastor was quick to point out that this was an unbiblical perspective that subverted God’s designated hierarchy of patriarchal authority.

My grandfather shook his head. He looked over at my sister, patted her knee, and whispered (loudly), “You don’t believe any of this stuff, do you?”

80 years listening to Baptist sermons. 80 years, and still the hard complementarian message my grandfather heard that Sunday unsettled him. He didn’t believe it. He was unfamiliar with it. It seemed different.

This is my point. The hard complementarian message today that argues women are ordained by God to be subordinate to men and that this excludes them from most leadership roles in churches (teaching, preaching, serving as deacons and elders, etc.) is different. Yet it has so permeated evangelical culture–through Wayne Grudem’s Systematic Theology that is so pervasive in seminary culture, through John Piper and Wayne Grudem’s Recovering Biblical Manhood and Womanhood, through Desiring God podcasts, through the popularity of the Acts 29 movement, through Focus on the Family–that most Christians don’t even blink during a sermon on female submission and male headship. I would surmise that many Christians would think it heretical to NOT argue for male headship and female submission. It is the divine order. Right?

As I discussed in a previous post, evangelical Christians in modern America fixate on a handful of verses to discuss women’s roles in the church–namely 1 Corinthians 11 & 14, Colossians 3, Ephesians 5, and 1 Timothy 2.  Most arguments for complementarianism stem from these verses. These verses have become so prominent that many Christians–especially in churches identifying as evangelical–have a hard time seeing women through any other lens.

But these verses have not always defined Christian womanhood. Something has changed.

Today I am going to give you a peak at my current research into medieval sermons (stay tuned for my almost-finished book project, Women in English Sermons 1350-1500). Out of 120 late medieval English sermon manuscripts that I have examined (some of which contain a handful of sermons while others contain upwards of 50 and even 100 sermons in each manuscript), which includes the most popular and widely circulated sermon compilation in late medieval England (John Mirk’s Festial), only 5 manuscripts reference either the Pauline prescriptions (1 Corinthians 14 and 1 Timothy 2), the household codes (Ephesians 5 and Colossians 3, as well as Titus 2 and 1 Peter 2), or the so-called Pauline doctrine of male headship (1 Corinthians 11:3).

So, again, out of 120 sermon manuscripts, which represents the majority of surviving late medieval English sermon collections, only five reference the verses which today are synonymous with biblical womanhood.

Have I got your attention? The way we understand biblical womanhood today is NOT the same as it has been understood in the past.

Okay, let’s deal with the resistance.

First, I imagine some of you will resist this argument because of false beliefs about the medieval Bible. The rebuttal will go something like this. It isn’t at all a surprise that medieval people didn’t focus on Bible verses about women because medieval people (including priests) didn’t know their Bible. Most of them didn’t have access to the Bible before the Reformation. Sorry. Wrong. I have argued before that medieval people may have known their Bible better than we do today–they just focused on different verses (see my previous posts).

Second, I imagine some of you will resist this argument because of correct knowledge about the medieval world. Medieval women did live in a patriarchal society and most women were legally under the authority of their husbands (and, yes, this is correct-I have never argued the medieval world was a golden age for women because it wasn’t…). Your rebuttal will go something like this. If sermons are responsive to problems within the church, maybe medieval preachers mostly didn’t need to preach on female submission because it was not questioned. It isn’t until the feminist movement that women began to question their God-ordained role, and hence why preachers today emphasize male headship. This is a better rebuttal, but it is still wrong. It assumes that medieval preachers constructed sermons for the same purposes as today. They often didn’t. The main purpose of late medieval English sermons directed to ordinary Christians was to help them understand and practice their faith. Sermons were very pastoral in nature–focused on conveying the gospel and the necessary components for salvation (the sacraments). Gender roles were not considered part of the gospel message nor central to salvation (which is actually different from how Grudem et. al. consider gender today…..). So medieval preachers didn’t fuss about submission. Wives submit to your husband wasn’t in the Ten Commandments, after all. Even if preachers were concerned about gender roles, they still probably wouldn’t 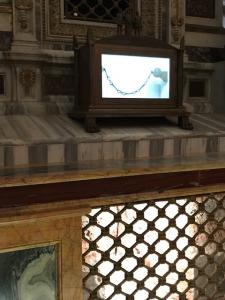 have preached on them because maintaining a gender hierarchy was not a priority for medieval preachers (at least from the evidence of late medieval English sermons).

Which brings me back to my main point–something has changed. Medieval preachers didn’t consider gender roles central to the gospel or salvation. This is different from how gender roles are regarded by the complementarian movement today.

I haven’t even scratched the surface on why these differences exist in medieval sermons. You will have to wait for the book for that. But in some ways the reasons don’t really matter to this post. My point is simple. I want you to understand that the way biblical womanhood is defined today is NOT the way it has been in the Christian past. The way Pauline texts are used against women today has NOT been constant throughout church history. Subordination has NOT always been assumed an essential part of biblical womanhood.

To conclude, I want to tell you about the pictures and the title I chose for this post. My parents went to Rome just last week. They visited the church of St. Paul Outside-The-Walls and my dad sent me the pictures I used today. According to early tradition, this church venerates the original grave of St. Paul after his execution by Nero. It also contains an interesting relic–the chain that (supposedly) attached the Apostle Paul to his Roman guard.

This chain, however, no longer has power over Paul. Its power was interrupted a long time ago. Today it is just a reminder of Paul’s imprisonment.

This is all I hope to do. To interrupt the growing idea that biblical womanhood is, and has always been, defined by a handful of scriptures from Paul. Join me next time as we move our discussion into global Christianity. 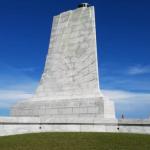 March 20, 2018
The Bishop's Boys: Religion and the Wright Brothers
Next Post