Now here is an interesting challenge. If you were writing a history of the United States in the 21st century, what would you include, and how would you tell the story? And yes, there is indeed amply enough of this century already for it to demand a substantial history.

That is a problem I face rather pressingly. Back in 1997, I published a one volume History of the United States, which has sold respectably and been translated into eight other languages to date. It has been quite influential in Europe. I update the book regularly, and am now committed to completing a fifth edition, the manuscript to be submitted by the end of the year, to be published in 2017. Technically the deadline is November 1, but I will be sure to squeeze in the result of the upcoming election!

The book has seven chapters, and the final one is “Contemporary America.” In the latest edition, that chapter will cover events from 2000 to the present, in around fourteen thousand words, which is not much. In revising, I am not allowed to add significantly to the book’s overall length. The book’s main advantage, its main selling point, is that it is concise and manageable for non-expert readers. If I add something to the post-2000 period, then something else that is already in the book has to go.

Now, this task is not quite as horrendous as it sounds, as I will have laid the foundation for these topics in earlier chapters. If for instance I am describing the US experience with the Middle East, I will already have described the 1980s terrorism wave and the 1990-91 Iraq crisis in the previous chapter, on the 1965-2000 era, and would just have to update things rather than introduce them afresh. The same chapter will have in some detail introduced themes like feminism and the gay rights movement. But even so, there is a lot to say on very recent developments.

Just imagine a science fiction cliché. Suppose that a man went into a coma on the last day of 1999, and has just been awoken in September 2016, with his intelligence and curiosity intact. So, he asks, just what has happened to America in all these years?  (“Well, we have a great documentary about contemporary life and culture that will serve as an orientation film. It’s called Idiocracy).”

But where would you start?

If I am covering a period like the mid-nineteenth century, there are a thousand precedents to guide me. I know exactly the main events and personalities to include, although I might add a bit of variety by including some surprising ones, and omitting some standard themes. But for the very recent era, the “standard narrative” does not yet exist, and we are in a sense making it up as we go along. We face the danger of adding things that will seem trivial or meaningless in a few years, while excluding things that in retrospect are crucial and indispensable.

We always tend to be very presentist, seeing significance in things fresh off the headlines. In the 2012 edition, for instance, I described the Occupy movements, which I certainly won’t devote much attention to on this go-round. But how do we know whether something like Black Lives Matter will represent an enduring presence in the political scene, or if it will be forgotten within a year or two? It’s a tough call.

I do my best to present a narrative that is non-partisan, thoroughly fair and balanced, but obviously one’s own political leanings must of necessity guide the choice of key topics.

One other peril in writing contemporary history is in focusing too much on the political rather than the social and cultural, and academic historians generally pay way too little attention to technological and financial innovation. I might for instance suggest that as the history of the past sixteen years comes to be written, the coming of the IPhone will in future be thought vastly more significant than Obamacare, or the US invasion of Iraq, or even than the 9/11 attacks. But who knows?

Similarly, if you try and write the history of the last sixteen years without paying full attention to the shale oil boom, you are missing a very large portion of the story. Although we often talk about the central role of oil in American economic life and foreign policy, we understate how critical it is for regular politics. Oil prices determine the fates of different regions (of course), and also condition the mood of American political life generally. Tell me the price of West Texas Crude at any given moment, and I can tell you a great deal about how much people care about elite misbehavior, and thus the likelihood of ruinous political scandals. (More on this topic in a forthcoming blog).

On specifically religious matters, just what are the five or ten critical stories that any reasonable account of very recent US history absolutely has to include? I would certainly include the post-2002 Catholic clergy abuse scandals, but what else? The implosion of the Religious Right? Homosexuality debates within churches and religious institutions? The furor over the Nones, and claims of incipient secularization?

And here is another issue. The US is a world power that interacts with many (most) other regions of the world. How much do I have to say or explain about, for instance, US policy towards the South China Sea, or the Ukraine? I can’t write a history of the whole globe. (Well I could try, but not at this word length).

Imagine also that in 2020 or so, the US and China engaged in a shooting war over the South China Sea, perhaps even deploying nuclear weapons. In retrospect, I would look like an idiot for not even touching on what was, evidently, the central political issue of our time. It would be like reading a hypothetical History of the Contemporary United States penned in 1939 that did not deign to mention US relations with Japan. Or maybe the South China Sea conflicts will all blow over without conflict, and future readers will wonder why on earth I was wasting space on these irrelevant diplomatic minutiae.

Hmm …. are we electing a war president this coming November?

In other words, when I write about the contemporary world, I must of necessity be making judgment calls about where I think that history is going to be going in the next five or ten years, to decide what readers will be interested in. In that sense, the professor must seek to be a prophet.

Next time, I’ll describe my outline in more detail.

Please note: if you plan to respond to this post, World Table is having some problems with Firefox as it operates on Macs, and their best efforts to resolve the issue have not worked. If you do run into problems posting or responding to posts, try an alternate browser, such as Chrome or Safari. Thanks! 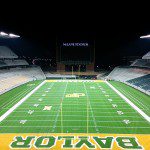 September 3, 2016 Football at Christian Colleges and Universities
Recent Comments
4 Comments | Leave a Comment
Browse Our Archives
get the latest from
Anxious Bench
Sign up for our newsletter
POPULAR AT PATHEOS Evangelical
1